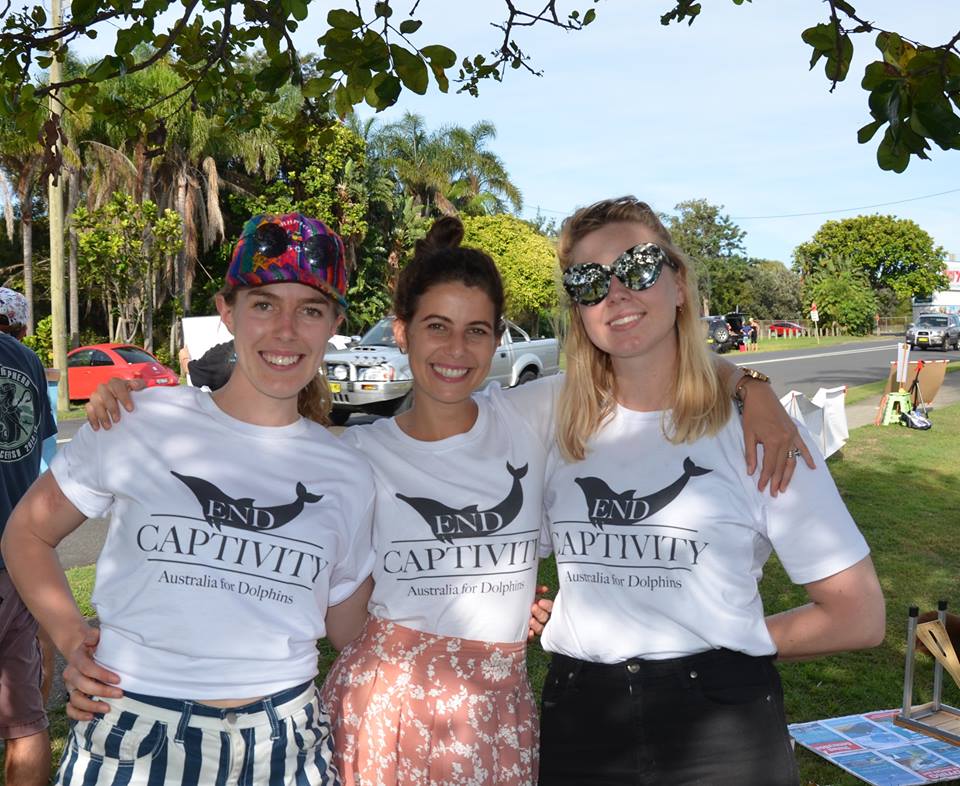 Australia for Dolphins (AFD) is a not-for-profit dolphin protection organisation with just two full time staff members. Even though they’re a small team, they pack a powerful punch.

In 2015, they brought legal action against the world’s peak zoo body, resulting in more than 60 Japanese aquariums being forced to stop buying dolphins from the violent Taiji hunts. They also successfully sued the notorious Whale Museum in Taiji, the centre of the bloody dolphin hunts.

In 2017, they had their sights focused on an Australian marine park, who still held dolphins in captivity. The team decided that they were going to sue the park for false advertising - their ads that said dolphins were happy and healthy, they just aren't true.

Here's how they did it:

Tactic 1. To tackle a global issue, focus on one story

The global dolphin captivity industry is such a large scale global issue that it can be overwhelming and lacks an emotional hook.

Rather than focus on the industry issue, AFD focused their story on one particular dolphin at Dolphin Marine Magic.

"We realised that the best way to raise awareness about this complicated issue and drive the campaign forward was to give it a singular narrative. We focused the story on one particular dolphin, called Ji, to give people a better idea of what the bigger picture is about. The title, video, the name of the legal action were all focused on this one dolphin, Ji.” Tactic 2. Get to new audiences by leveraging your existing ones

For AFD, whenever they run a crowdfunding campaign, they focus on using it to reach new audiences. How?

1. Ask their existing audiences (people who they know are passionate about the cause, including people who had previously signed petitions or signed up to their newsletter) to share their campaigns with their family, friends and networks

"We have a number of supporters that already donate to us on a regular basis, and others that have donated substantial amounts in the past. We don’t want to ask them for more funds and will often exclude them from our other fundraising asks and campaigns. We will, however, keep them updated on what we’re doing: send them an email to let them know we’ve launched a new campaign and to thank them for helping us get this far (we treat them as if they’ve already supported our campaign, because in all honesty, they’re the ones who’ve gotten us this far already!). We may still ask them to like and share our posts on Facebook, so they can help us reach more people.”

2. Run Paid Facebook Ads: Advertising petitions and crowdfunding campaigns on Facebook to selected targeted audiences. They focus on people who are interested in animal welfare or specific dolphin captivity issues.

Here’s an example of a Facebook Ad they promoted during the campaign:

This segmented approach to communications, making their core supporters feel valued and included while focusing on reaching new audiences, is a powerful strategy that has allowed AFD to grow their audience to a strong community of over 200,000 people passionate about dolphin welfare over the past few years.

"Before each campaign we benchmark our database numbers. When we advertise our petitions and advocacy campaigns – we don’t want people who’ve already signed to sign it again - so we exclude them from our email communications to make sure that all the people we are getting involved are new. With this particular campaign (which was a combination of petitions and the crowdfunding campaign), we got 20,000 new people on board, which was really great.“

Tactic 3. Get PR and media on board

The fact that AFD found an avenue of Consumer Law that allowed them to sue the marine park for misleading people to believe that their dolphins were happy and healthy was not only incredibly innovative, but also newsworthy. They knew the story had a good media hook and could get a lot of PR attention.

“A national TV show called The Project produced an exclusive segment explaining the pending legal action and the underlying issue of dolphin captivity. So, when we launched the legal action there was already interest surrounding the case.”

By having all the PR contacts and press releases lined up before launch, and letting journalists know beforehand, they were able to generate awareness during their campaign which they could then use to contact their supporters again and raise more funds.

For more tips on how to get PR on board, check out '5 steps to get PR for your Crowdfunding Campaign'.

Tactic 4. Secure match funding as the ultimate incentive for giving

Perks and rewards are a great way of incentivising supporters to support your campaign or to give more than they usually would. However, because of the nature of their campaign, AFD decided that getting matched funding instead could be the ultimate reward for people to support their campaign:

"Prior to this campaign, we had run a Chuffed.org campaign to put up billboards in Tokyo to blast real images of the dolphin hunts. Each dollar raised during that campaign was matched by EthicalJobs.com.au. This time, however, the nature of what we were fundraising for was quite different and we felt we had to come up with more engaging content. We realised we had to come up with a good video and spent some time on that. But we also thought about prizes and rewards. Because matched funding had worked well in our previous campaign and the nature of the campaign, and the need to keep admin costs low prohibited us from creating fancy perks, we decided to look for match funding instead of prizes.”

This is how the match funding on their first campaign was communicated: 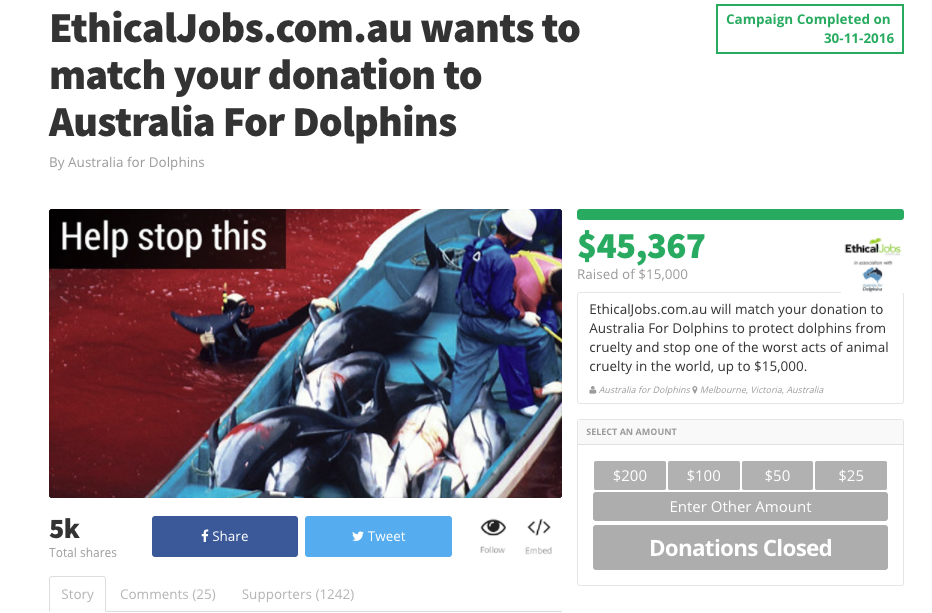 "We’re a really small charity, there’s only 2 full-time staff and although that has its challenges, it allows us to take a very personal approach to our donors. We’ll personally call everyone who gives more than $250 and will meet as many of them in person if we can. We’re in touch with them all the time and really build personal relationships with them. Almost like a community of people. Because we build a great relationship with donors, we find out what they’re passionate about (ie. Taiji or captivity issues). When something comes up that we think they might be interested in, we get in touch with them and see if they want to get involved. Keep them updated throughout - make them feel very involved.”

This is how they communicated the match donation to their supporters on the campaign page:

Although the crowdfunding campaign was focused on one particular marine park, the success of the case could have wide ramifications.

"This will send a very loud warning bell to big marine parks like SeaWorld. It will also set a precedent, which we hope will bolster global efforts to end dolphin captivity and help convince politicians this cruel practice has to end." - Jordan Sosnowski

To learn more about AFD and their Crowdfunding campaigns on Chuffed.org, here are their campaigns:

If you are a charity, nonprofit, community group or a caring individual who wants to use crowdfunding to tackle a global issue or a local one, reach out to us at support@chuffed.org. We’re here to help.

Inspiration
Meet other people making a difference and get support for your cause!
Read more
View all articles