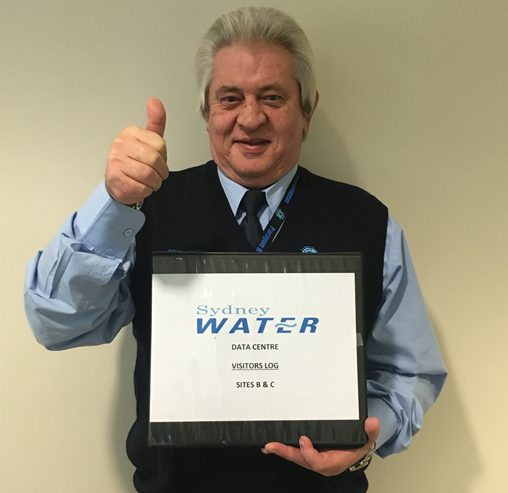 ''I started at Sydney Water a little over three years ago at our Sydney Olympic Park location.  At that time, there were not many staff located at the site, which made it easy for everyone to get to know everyone else.  We have 24 x 7 Security Guards onsite, employed by a security company, and they too, are a small team.

The senior member of the security team is Markus Kruger.  He has been with Sydney Water a long time and due to his length of service, there are very few people in the company that Markus doesn’t know or who don’t know him.

A few weeks ago, Markus was on duty and not feeling well.  Due to the pain he was in we called 000 & requested an ambulance.  The paramedics came, checked him out & took him up to Concord hospital to be on the safe side.  The hospital kept him for a few hours & then discharged him.  They did not find anything serious.  The next day Markus went for a planned MRI scan & that turned up a ruptured aorta.  He was in an ambulance straight away up to Liverpool hospital, where he was operated on for 8 hours.  Markus was very lucky to be alive as the doctors were able to fix the rupture.

As bad luck never seems to happen singularly, the security company folded four days after Markus’ surgery.  Completely unrelated, of course, but very bad timing for him.  In addition to having a major health issue he now has to recover from, Markus has no job to come back too.  His wife, Marion, cannot work or drive due to health issues of her own.

We wanted Markus & Marion to be able to focus on Markus getting better.  Not on how they were going to pay the rent, the utilities or buy groceries.  We know that with this type of health problem Markus has a long road to recovery, so they could really use some help.  Most of us are all just one accident or incident away from where Markus is now and it is the right thing to do to help out a mate.''

Support Markus & Marion at this time by checking out their campaign page below: