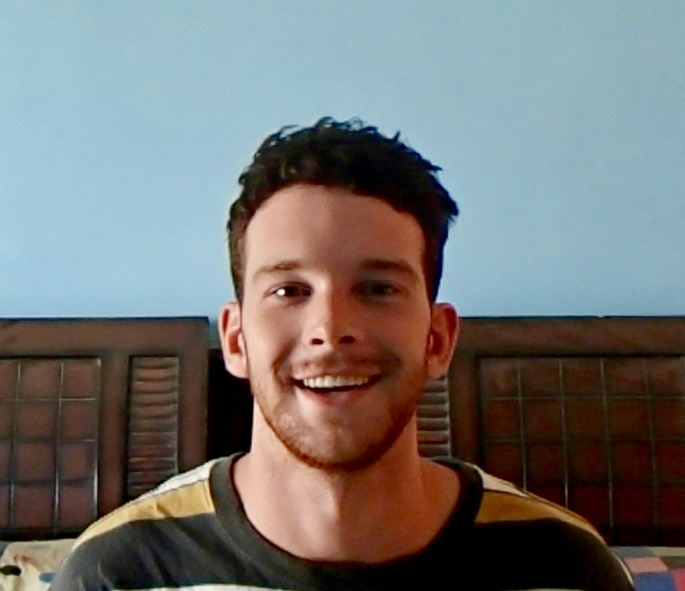 You want to change lives with your crowdfunding campaign—but how?

Setting a large goal looks overambitious, like it’s doomed to fail from the start.

But of course, you don’t want to set a goal that’s too small.

So how do you raise a huge amount and motivate donors to give?

Enter the stretch goal example of Kieron Safstrom, who beat not one but four separate goals with his massively successful crowdfunding campaign.

Kieron is a recently graduated nutritionist who travelled to India shortly after receiving his degree.

He knew fortified milk could reverse the rampant malnutrition he encountered, and set about to provide the supplement to the children he worked with.

Kieron set up the #Milk4Marks campaign over the weekend with a starting goal of just $3,000—a figure he raised in a mere 10 hours. 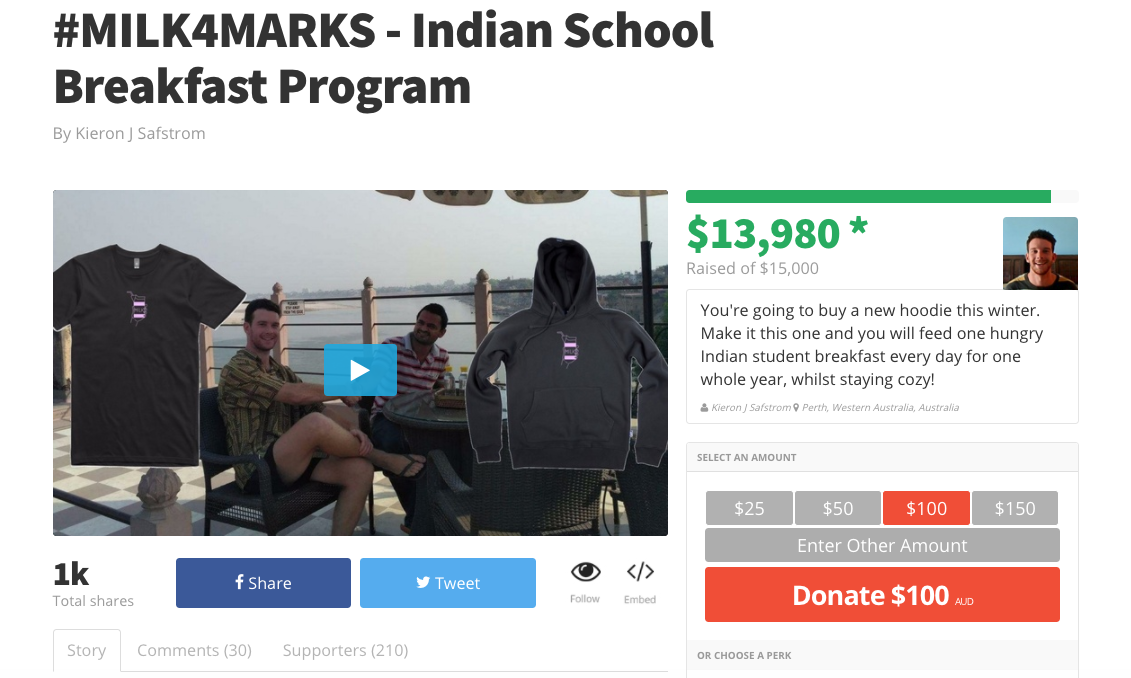 Kieron is a likable guy—someone who could tell a great story at a party or make any kid smile.

He used his personality to tell the story of his plan.

Using the camera he had available to him in India, he recorded a simple video explaining his discoveries. The video isn't very high quality, which adds to its authenticity. 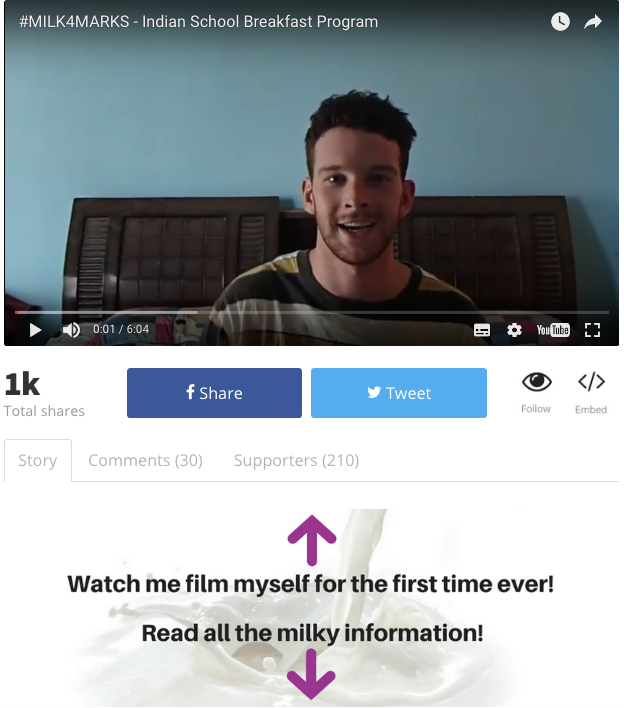 Kieron even pokes fun at his first recorded video with the caption "Watch me film myself for the first time ever!"

To make the video a success, Kieron didn't just spout off facts and figures of an impersonal problem.

He told a story.

First, he explained his background and his trip to India. He built up the credibility of his goal by explaining the large organizations that supported his efforts.

Second, he painted the problem in vivid detail. He explained that children went to school on an empty stomach and encouraged viewers to imagine it themselves. He explain that the malnutrition problem was widespread, elaborating that “it’s on an energy level, it’s on a protein level, and it’s on a micronutrient level.”

In addition to a video, he included pictures of himself to tell the story of his discoveries and add faces to the issues he saw. 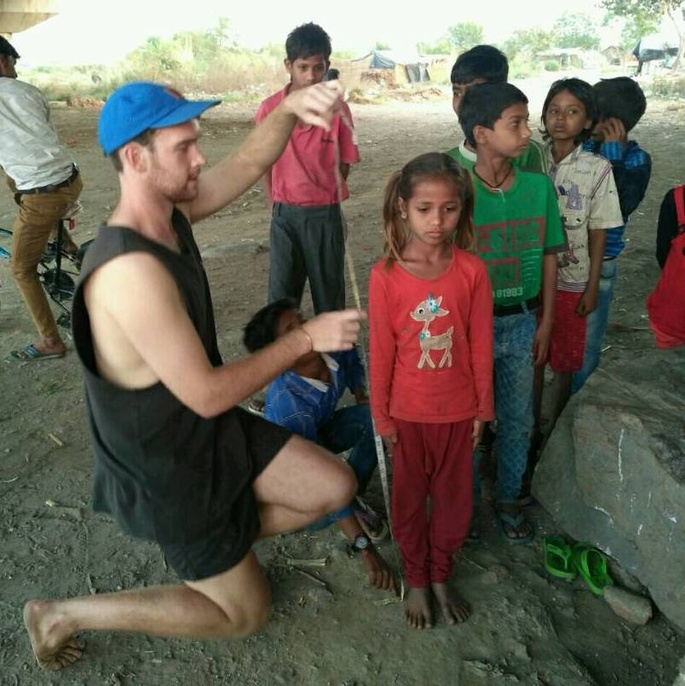 He showed that fortified milk would make a huge difference in the lives of children, improving their livelihood and academic potential.

He also built rewards into the program—supporters would receive a T-shirt or hoodie, with the proceeds going to provide fortified milk to malnourished children in India.

But instead of focusing on those extrinsic motivators, he mentioned them only briefly at the end of the video. The focus was on helping children, not on receiving rewards.

By telling a compelling and personal narrative and focusing on helping others, he was able to rally donors to support his cause.

Unlike a lot of campaigners on Chuffed, Kieron didn't have an email list at all.

Instead, he promoted using the one form of communication he knew he had access to—his personal Facebook connections.

He promoted the project heavily to his current Facebook friends, posting multiple times per week.

But he didn't ask for money every time. Instead, he posted constant updates with pictures and specific details, keeping supporters in the know about how the campaign was going.

He reached out personally to his 60+ nutrition classmates from university, knowing they would be especially interested in the project. Sure enough, ⅓ of his classmates purchased jumpers, and ½ shared the post to their friends.

In addition to his personal friends, he also reached out to groups he was a part of—nutritionist groups, his university, and others—and leveraged his connections with larger organizations.

He wasn't pushy and didn't directly ask for support. Instead, he just asked them to check it out. His strategy worked, and he received shares from some brands with large followings. His university shared the story:

And the company that printed his stickers:

Using his social connections, he was able to reach a range of people that supported his cause and encouraged others to do the same.

While a campaign that crushes a series of objectives seems like a miracle, there's a science that goes into building the momentum necessary to drum up excitement and participation.

Kieron's example of a stretch goal did this masterfully.

First, he started with a small target he knew he could reach ($3,000). Before even launching the campaign, he reached out to his connections and asked them to help support the project.

As a result, he was able to meet the target within just a few hours and before even publicly launching the campaign. He leveraged that to build excitement—proving #Milk4Marks was going places fast.

This quick success made the story even more shareable, and friends wanted to share the tremendous success they saw.

Rather than a plea for money, friends could post about the success Kieron was having and the lives he was changing. And post they did!

By setting the target low, he also was able to constantly have a new update to announce—every time he met and set a new stretch goal!

These exciting posts kept readers engaged and showed the day-to-day progress of the campaign. Each stretch target was difficult but not impossible, keeping followers engaged and growing shares throughout each goal.

By setting the original target low, hitting it quickly, and building small-but-achievable targets along the way, Keiron was able to give the #Milk4Marks the momentum it needed to succeed.

Along the way, Kieron made some discoveries for his future campaigns.

If you're ready to build a crowdfunding project with wild success early on, follow the strategies Kieron used with #Milk4Marks campaign.

By crafting an intensely personal story, leveraging his connections, and setting the campaign up for success with small, incremental targets, Kieron was able to build massive support.

Even more importantly, he built the #Milk4Marks campaign into a fundraising success with thousands of dollars to help battle malnutrition.

Kieron's story is an example of a smart stretch goal that is changing the world.

To check out Kieron's story or support the #MILK4MARKS - Indian School Breakfast Program campaign on Chuffed, just head to: //chuffed.org/project/milk-4-marks

Case Studies
You have a big vision, you want to raise a large amount of funds for your cause, but you don't have a team? Read this to find out how Libby and Caroline built a team to Crowdfund $91,400 for Asylum Seekers
Read more
View all articles