Volunteers for the census met at Mt Molloy (population 273) at 7 am on the bright winter morning of 17 July 2017. Most were veterans of the census, a few were newcomers, all were keen to get into glider country and see how the population was faring since the last census in 2015. Our chief coordinator was QPWS ranger Andrew Hedges, who organised the logistics of vehicles, communication and safety, plus mustering of all participants every evening. 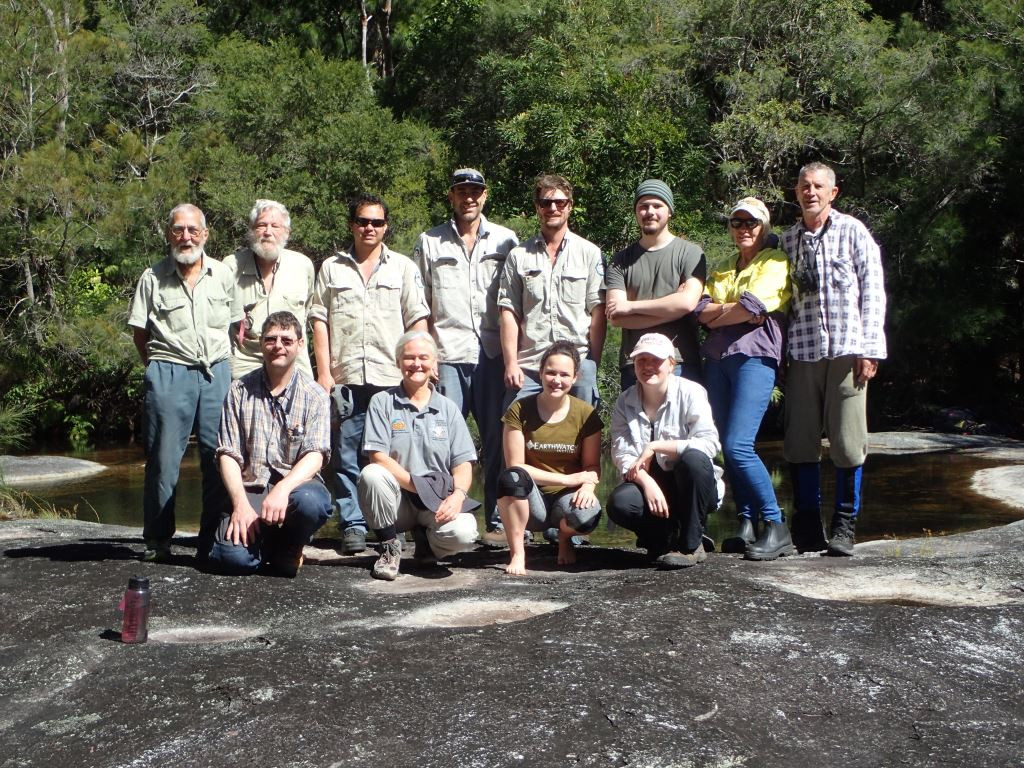 Three vehicles set off along the Mulligan Highway, turning north for Windsor Tablelands after crossing the McLeod River. There, in the foothills of the Great Dividing Range, a small cleared area doubles as a dump for road gravel and a helicopter pad. Helicopter pilot Des Butler of Airwork NQ met us there in a Robinson 44 (a nimble four-seater helicopter) and two by two (with a backpack in the fourth seat) we were ferried up, over the hills and deposited carefully on a wide granite rock in the middle of the "Little Daintree" in the headwaters of the Daintree River. 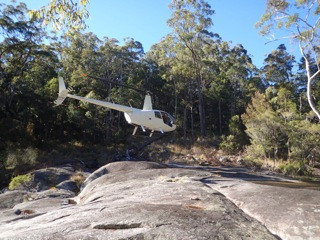 Forty minutes walk upstream, we reached the census campsite, set at one end of the 100 hectare Glider census area. About 40 glider-tapped Red Stringybark trees are known from previous visits, and one of these was selected as a “Training tree” where we all gathered on the first evening to learn (or revise) the census methods and what the gliders look and sound like.

As the light faded, we watched birds licking the sap which oozes from the incisions made by Gliders. The first Glider arrived at 18:32, while it was still light enough for us to see its remarkably long, almost horizontal glide, ending in an audible "thump" as it landed about 12 metres above us and proceeded to feed. It was soon joined by two tiny Feathertail Gliders who came for the sap but whizzed about nervously to keep away from the larger Glider. We listened carefully for calls as an important part of the census is to record the direction from which calls come, to help in locating active feed trees. The Yellow-bellied Gliders make a peculiar call, described by Rupert Russell as "beginning with high-pitched syllables, tailing off into a series of throaty sounds "Skree-skrr-skree-skrr-chuga-chuga-chuga" - if you can imagine that with French-styled rolled "r"s and a throaty gurgle, you may get the idea. Although difficult to describe, it is a very distinctive call, so we all felt confident that we would be able to distinguish it from the other night sounds. While on the tree, Gliders are quite vocal, making a whole range of sounds in addition to the full calls. 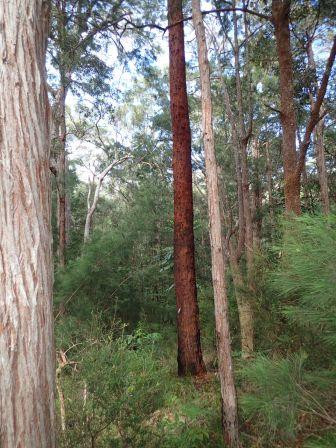 All known tapped trees were visited during the day - thanks to noting glider calls on the first evening, a previously unrecorded tapped tree was found about 60 metres from the “Training tree”. A tree in use by the gliders could be identified by birds attracted to the sap, these ranged from King Parrots to Eastern Spinebills. Observers were stationed at active trees each evening to record glider numbers and nearby calls.

The first night, I was alone next to a creek and thought I would have trouble hearing anything above the sound of several frog species - but the Glider calls were unmistakeable and I was surprised at how quickly the two hours passed. The next night I watched one side of an active feed tree which two Yellow-bellied Gliders visited, as well as two little antechinus that scurried up the tree and then froze with their heads at a sap scar, just discernible by their tiny bright eye-shine. The Gliders chattered and called and moved about the trunk, seemingly unconcerned by my passing a beam of light over them every five minutes or so. A crashing in the undergrowth turned out to be nothing scarier than a bandicoot, which seemed rather indifferent to the level of noise it made. The third night, stationed at an active feed tree that Gliders had visited the night before, we saw several White-cheeked Honeyeaters at the sap, followed by a sugar glider and two Feathertails, but sadly did not see or hear a Yellow-bellied Glider except in the far distance. I did make the happy discovery that the large (15mm) black ants that kept crawling over me in the dark were not aggressive biters, and did my best to ignore them.

Each evening we gathered back at camp to report our findings. The maximum count of Yellow-bellied Gliders per night was 18 for this trip. Careful time-keeping eliminates the chance of two observers marking down the same glider should it visit more than one tree for sap.

So why collect this information?

Yellow-bellied Gliders are restricted to Tall Eucalypt Forest well supplied with big Rose gums and mature Red Stringybarks. Suitable forest is distributed patchily along the margin between rainforest and drier forest. Family groups (of 2 to 9 Gliders) are territorial, using feed trees within an area that ranges from a few hectares in rich habitat to as many as 120 hectares in poorer forest. As suitable habitat becomes isolated in smaller patches through clearing or changes in forest type (for example, due to fire regimes and climate change), dispersal opportunities for Glider progeny to establish new groups is limited. The census at the Little Daintree site provides a reference for how Gliders are faring in a protected area under a particular fire regime. There is also long term monitoring at the Tumoulin Forest Reserve near Ravenshoe. The Tumoulin population has been isolated by clearing and is subject to greater pressure from feral and pet cats. The purpose of monitoring changes in population numbers and distribution over the long term is to determine how Glider populations respond to different forest management approaches.

In April we reported that QPWS had offered to cover any short-fall in the cost of the helicopter flights, so we closed the Chuffed crowd-funding campaign which had raised a fantastic $4300 for Yellow-bellied Glider research. In May, QPWS informed us that they could cover the entire cost of the helicopter charter, and thus the $4300 could be used for another aspect of Glider research.

The consensus of TKMG's Yellow-bellied Glider working group is to use these funds to buy two SM4 Wildlife Acoustic Song Meters. These robust meters can be placed in the forest to record sounds for many months. The data is then collected and analysed by researchers. This means that Glider activity can be monitored all night, for months, at as many locations as there are meters. The meters cannot replace the biannual counts at the Little Daintree or the ongoing monitoring at Tumoulin, but they will make it much easier to estimate Yellow-bellied Glider activity across a variety of locations.

Once again, Yellow-bellied Glider researchers and volunteers join in thanking you for your generosity - in combination with many, many hours of volunteer labour and experience, your donations enable increased understanding and better management of this rare and vulnerable animal. 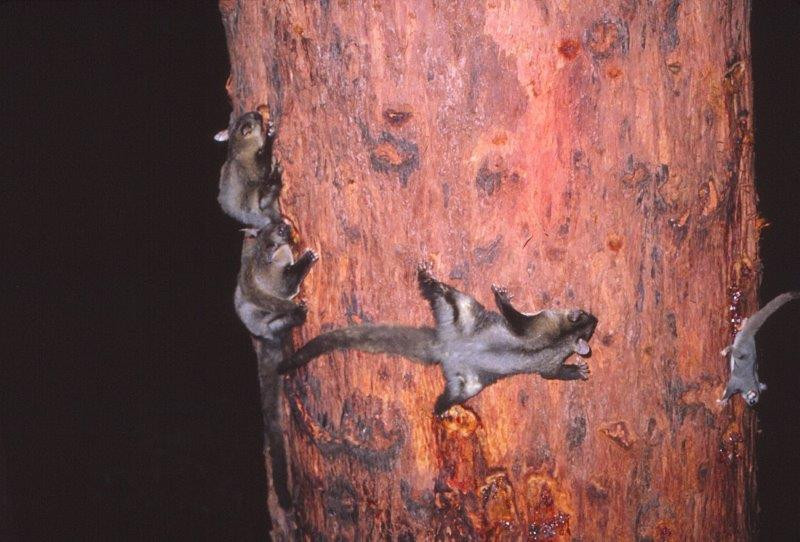 Campaign goal guaranteed – the census project will be airborne!

A BIG THANK YOU to all of you who have supported the appeal so generously.

Our target of $10,000 was based on three written quotes obtained before we approached Chuffed to help with a crowd funding campaign. But recently, by a happy chain of events Rupert made contact with a helicopter company which has made a magnificently affordable offer. Next an ABC reporter who noticed the Chuffed project asked to do an interview. This resulted in a quite long interview which went to air a little before the Easter break. The reporter, Mark Rigby, also put a story about the census on the ABC News site.

This story was noticed by Queensland Parks and Wildlife Service (QPWS) which led to QPWS deciding to make up any shortfall in the funds needed to fly the volunteers in and out. In the past QPWS has provided vehicle and staff support for all census trips, but had only once been able to finance a helicopter. There were not sufficient funds for a helicopter in 2017, but thanks to the generous donations, and with QPWS as a back-up, this will now be possible.

The campaign team would like to thank Chuffed.org for making the crowd-funding platform available and for providing such good advice and encouragement.

We'll send you all a report on the census in July/August – and thank you again for your support.

We appeal for your help to learn more about this beautiful glider. The north Queensland sub-species of Yellow-bellied Glider only lives in Tall Open Eucalypt Forest - a rare forest type in the Wet Tropics. 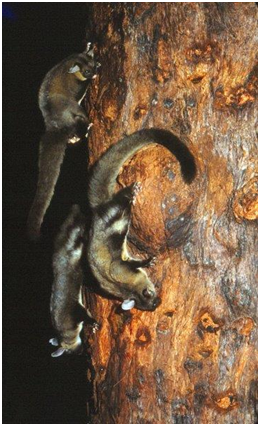 The last count in 2015 found only 18 gliders - we need to understand what is happening to this small, isolated population and how to best manage its rare forest habitat. In 1997 wildlife ecologist Dr. John Winter and Rupert Russell, a National Park Ranger, chose an area of Yellow-bellied Glider habitat for long-term monitoring. This census area is on the northwest edge of the Carbine Tableland in Daintree National Park. Keeping track of glider numbers helps with understanding how their tall open forest should be managed, particularly in relation to fire.

A staple food for Yellow-bellied Gliders is sap from Red Stringybark trees. The gliders choose particular trees to bite away small patches of bark so they can lick the sap which oozes out. Gliders usually come to their chosen trees early in the night, licking sap for a while before heading off in search of insects or blossom. Other glider species and birds also eat sap tapped by the Yellow-bellied gliders.

Each family-based group of gliders tap their own Stringybark trees, which become quite scarred and recognisable. These tapped trees are the clue to finding gliders. 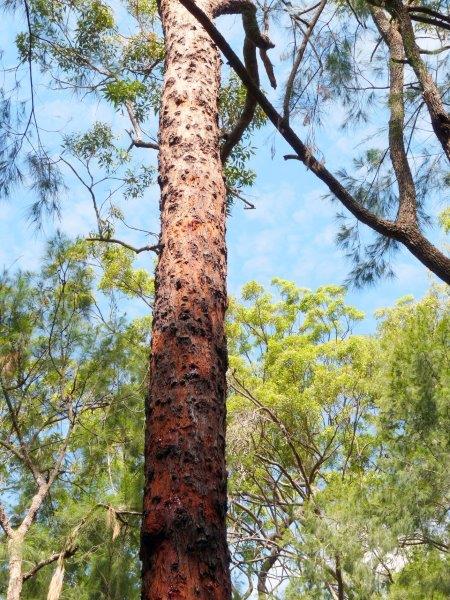 ... the challenges of a remote location

A glider census trip begins with a long drive over a rough track, ending near Mount Spurgeon. From there begins a very tough walk, up and over the Great Divide, each volunteer fully loaded with camp gear, monitoring equipment and food. After about eight hours the team reaches the census camp site. After a short rest all are guided to the nearest tapped tree to be introduced to gliders and the census procedure, usually by Rupert.

Next day everybody fans out checking on known tapped Stringybarks and recording any that are newly tapped. Near dusk, volunteers walk to appointed trees to watch for the gliders. The maximum number of gliders on the tree at any one time during a 90 minute watch is the count for that tree on that night. The effort is repeated the next night, and sometimes on a third. On the fifth morning the team walks eight hours back to the cars, dreaming of a hot shower and a soft bed. 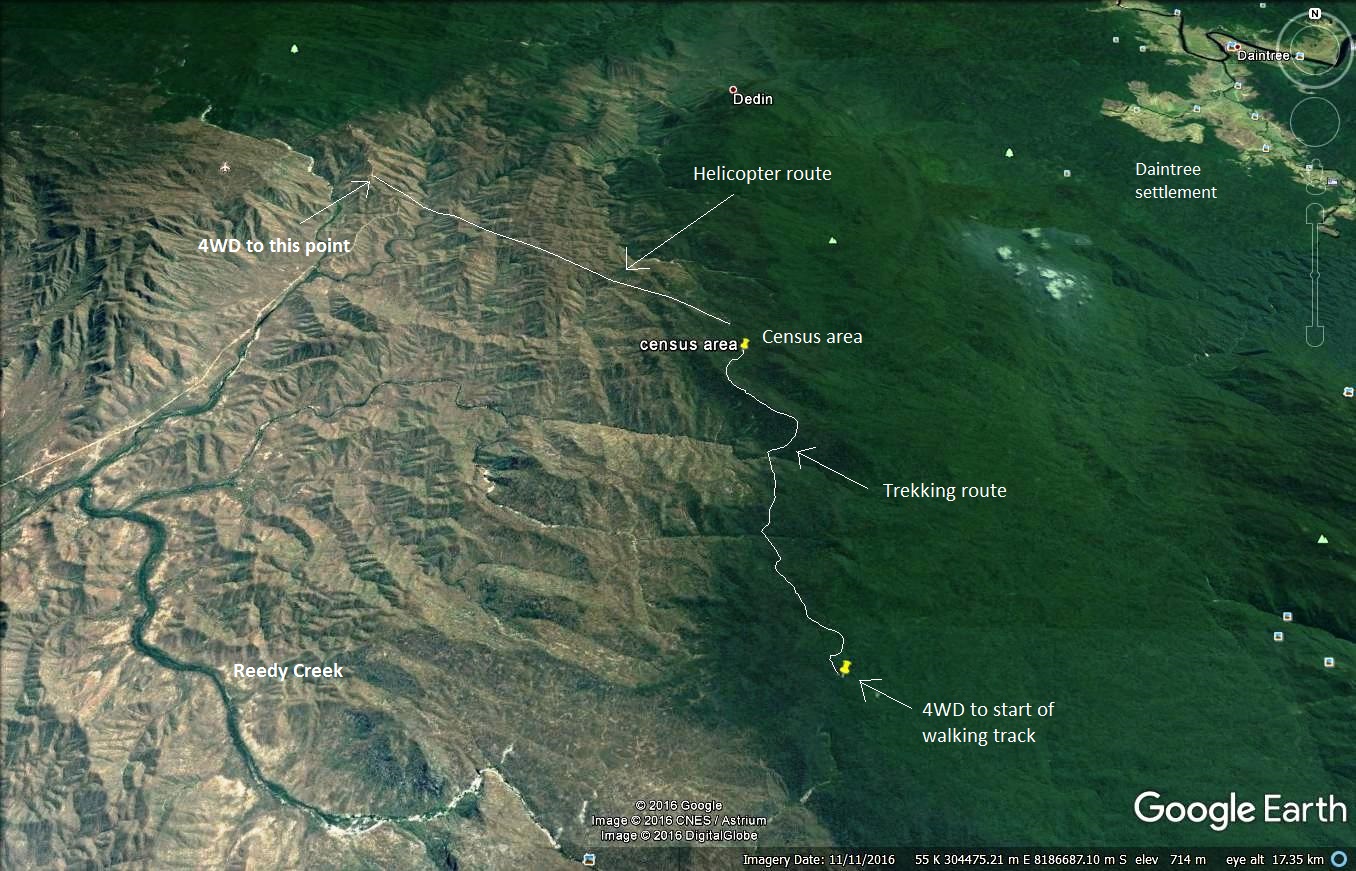 Our best count has been 26 animals. In 2015 the count was only 18 gliders. The low count is extra motivation to keep the census going. Unfortunately, there is currently little Government funding for long-term monitoring. 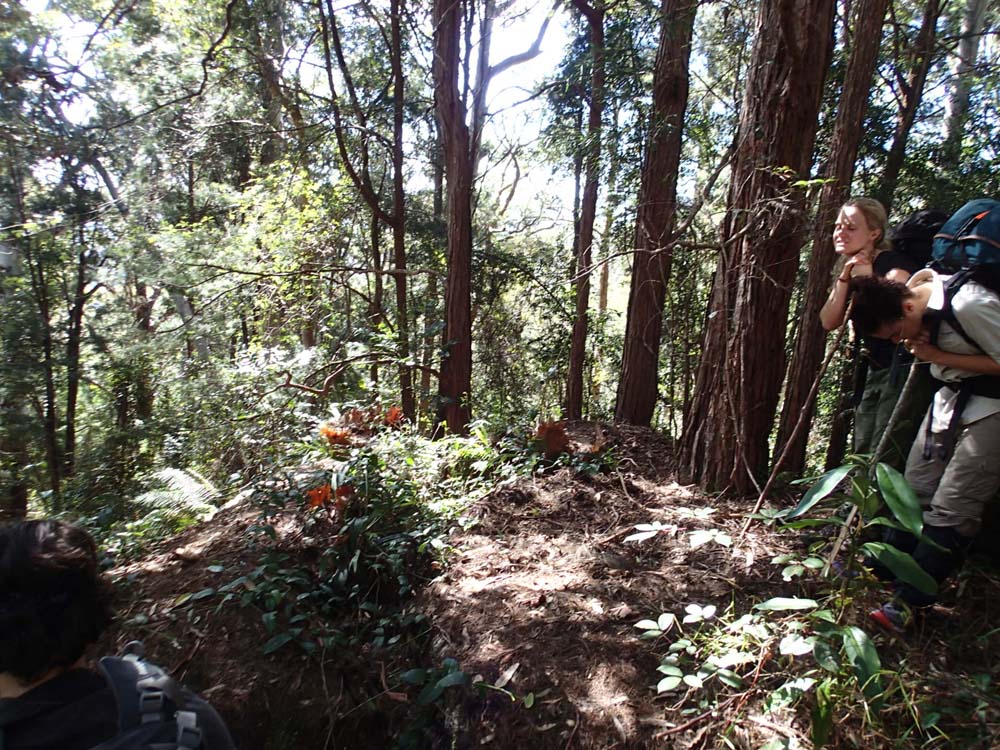 A helicopter can fly three or four volunteers at a time from the Windsor Tableland across to the Carbine Tableland, landing quite close to the census area. The trip is just a few minutes instead of a hard eight hour walk.

Your generous donation will help inform better management for this rare species and its beautiful but vulnerable habitat. 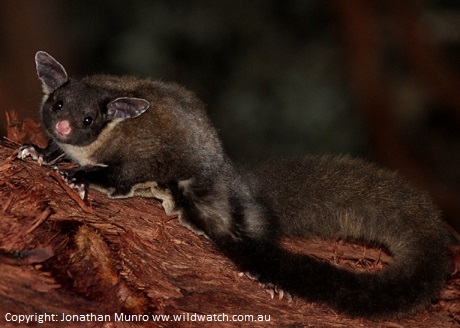 These rare gliding possums are vulnerable to either too much or too little fire - help us monitor glider numbers to improve management in this remote location of north Queensland.