By Market Forces (Friends of the Earth)

Westpac puts a lot of effort into building their brand, which includes talking up their sustainability credentials in their advertising. But in reality Westpac has lent billions to dirty fossil fuel projects, and is the only major Australian bank that hasn’t distanced itself from the controversial Adani Carmichael coal mine. The Adani mine threatens public health, the Great Barrier Reef and even our chances of a stable climate.

So what would it look like if Westpac's advertising actually told the truth?

Right now, Westpac is working on a climate change policy update. This is our chance to put some serious pressure on the bank to rule out support for any new fossil fuel projects, like the Adani mega mine, by hitting them where it hurts the most - their brand.

We think now is the perfect time to launch our own honest advertising blitz and rebrand Westpac. We'll start by covering the CBDs of some of our major cities - where Westpac does the most business - with our new ads.

It's time Westpac executives were under pressure, not our climate.

If we can get Westpac to rule out lending money to new fossil fuel projects, we can cut off billions of dollars to this dirty industry. We can cut off a source of funding for Adani, a project that would be a disaster financially and environmentally.

The Adani project has support from all levels of government in Australia. One of the only ways left to stop this dangerous project is to ensure it never gets funding. 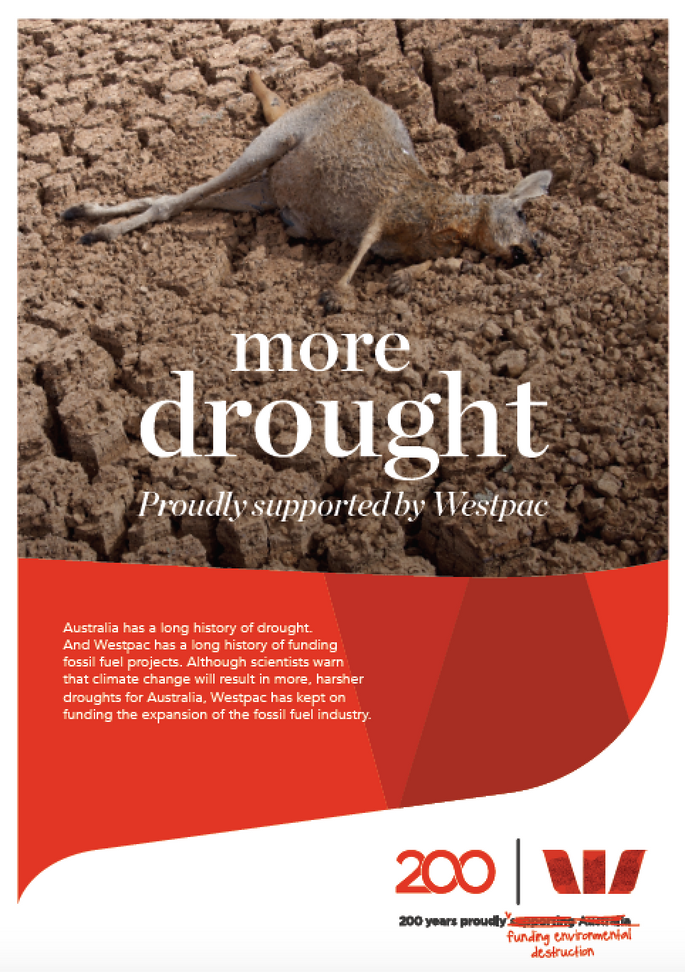 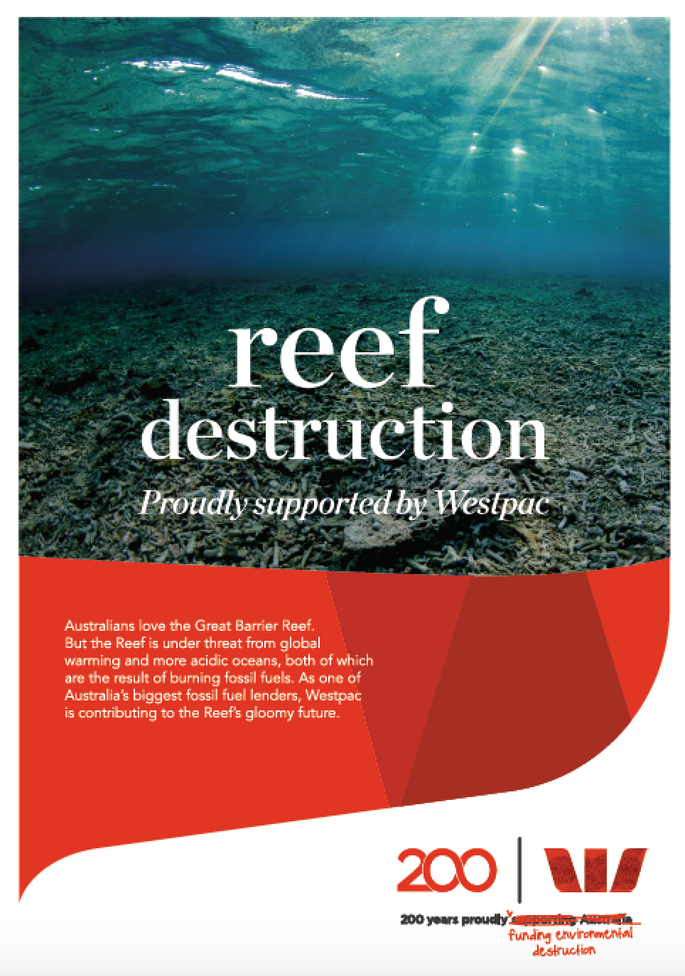 The more money we raise, the further our honest advertising blitz can go.

We need to raise at least $7000 to cover design, printing and distribution costs of the top two posters across Sydney, Melbourne, Brisbane, Perth and Adelaide. Every extra dollar we raise above this amount means more advertising, and more people seeing the ads, including in other parts of Australia and even overseas.

And we need to do it quickly - before Westpac finalises their new climate change policy. The more you give, the more people will see the ads.

Westpac's brand is their most valuable asset. The more we can call out their hypocrisy, the more likely it is that they will be pressured to act to keep their promise to fight climate change.

Please chip in and help us raise the heat on Westpac, not on our climate.

Help us rebrand Westpac with an honest advertising blitz, which will pressure the bank to rule out supporting any new fossil fuel projects, starting with the Reef-killing Adani Carmichael coal mine.

Pick your favourite ad - the top two, as chosen by our backers, will be printed and plastered all over our major cities.

$50 Have your say and get a campaign poster!

Pick your favourite ad - the top two, as chosen by our backers, will be printed and plastered all over our major cities. We will also send you a campaign poster.

Est. Delivery Date: You can vote now, and the poster will be mailed to you in a month. We will be in contact to get your delivery address.
27 claimed
Unlimited left

$100 Have your say, a free poster and a campaign shirt!

Pick your favourite ad - the top two, as chosen by our backers, will be printed and plastered all over our major cities. We will also send you a campaign poster and a t-shirt.

Est. Delivery Date: You can vote now, and the poster and shirt will be mailed to you in a month. We will be in contact to get your delivery address and shirt size.
16 claimed
Unlimited left

Get in touch with Exposing Westpac with new honest advertising