A Brighton plaque for Violet and Daisy Hilton

Violet and Daisy were the UK's first surviving conjoined twins, born at home in Riley Road in Brighton in 1908. Rejected by their mother Kate Skinner, midwife Mary Hilton recognised their moneymaking potential and took them off her hands. Mary put them on show as babies, at the Queen’s Arms where she was landlady, and people paid to raise the girl's gown to see where they were conjoined.

They were taken to America by the Hiltons where their singing, dancing and musicianship was appreciated – in fact they were huge stars! But the Hiltons kept all of the money. As adults the twins took the Hiltons to court and gained their freedom but settled for a portion of what they were worth.

Free of their 'guardians' they struggled to manage their careers but appeared in two films over the years: Freaks in 1932 and Chained for Life in 1952 (see YouTube clip above). They were befriended by escapologist Harry Houdini who taught them how to mentally separate from each other.

They returned to Brighton only once, on a UK tour in 1933, headlining at the Hippodrome for four sellout shows. They tried to find their mother on that trip, only to discover she had died when they were four years old.

Down on their luck in the early 1960s, they found new jobs behind the checkout of the Park-N-Shop in Charlotte, USA. They succumbed to the Hong Kong flu pandemic and died at home in January 1969.

Here's a piece about them on BBC's The One Show featuring their niece Shelagh.

After a good deal of confusion and conflicting evidence, I have finally tracked down their genuine birth certificates, which confirm that they were born at 18 Riley Road. I've also got the go-ahead from Brighton & Hove Council (and the wonderful owners of number 18) for a commemorative plaque to be placed on the building, we now just need to raise the money to make it happen. It costs around £1,200, plus roughly £300 for scaffolding costs, so £1,500 is the target I'm aiming for.

If you want to come on a walking tour with me around the centre of Brighton, I'll be posting details on www.thebrightontwins.co.uk.

If this campaign goes way better than expected (you never know), any extra money will go to facingtheworld.net, a UK charity who offer life-changing surgery for severely disfigured children (including conjoined twins).

Brighton & Hove buses are already proud to be associated with them... 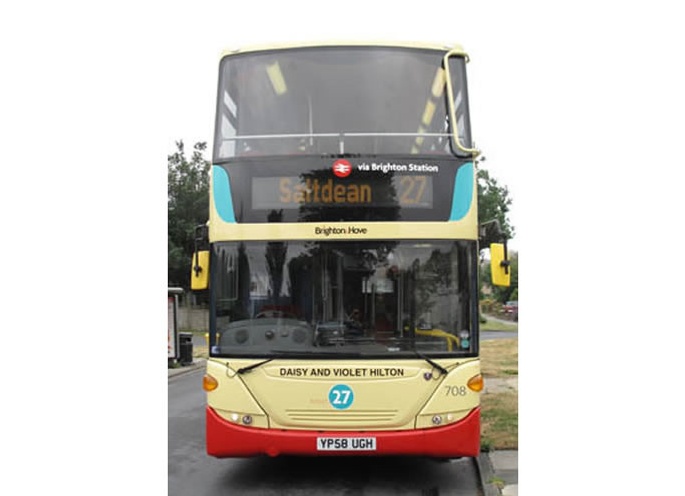 Violet and Daisy Hilton were huge stars in America, but their birth place in Brighton remains unmarked. Let's celebrate two of our own with a commemorative plaque.