My name is Professor Jenny Hocking, I am a Monash University academic and Gough Whitlam’s biographer. In 2016 I launched an historic Federal Court action against the National Archives of Australia to release the ‘Palace letters', secret correspondence between the Governor-General Sir John Kerr and the Queen relating to the 1975 dismissal of the Whitlam government. With your great support we have taken this case on a remarkable three year journey - from the Federal Court to the full Federal Court on appeal and now, with the success of our Special Leave application before the High Court of Australia, we're heading to the High Court for its final resolution.

To reach this ultimate goal and to put our case for the release of these historic letters before Australia's highest court I need your continued support. I urge you to donate and to spread this message among your friends and colleagues so that these extraordinarily significant documents in our history are available for all Australians to see and to know what really happened when the Queen's representative dismissed the elected government of Gough Whitlam.

The Palace letters are held in the National Archives and withheld from the Australian people under the embargo of the Queen, they are the final missing piece in the puzzle on the most controversial episode in Australia’s political history. 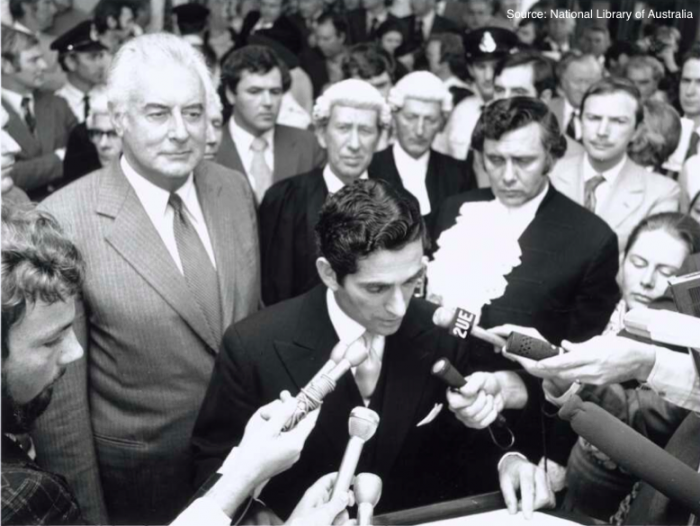 On 11 November 1975 the Governor-General Sir John Kerr, the Queen's representative in Australia, dismissed the Prime Minister Gough Whitlam and his entire government from office. In the 44 years since the dismissal, the real story has become clearer, largely through dramatic revelations from Kerr’s private papers, held by the National Archives of Australia.

There is one crucial part of Kerr's papers that remains blocked to us - ‘the Palace letters’. These are the secret letters between Sir John Kerr and the Queen at the time of Kerr’s dismissal of Whitlam.

The National Archives of Australia is refusing to release these letters, claiming that they are 'personal' and not official Commonwealth records. The Palace letters are embargoed until at least 2027, with the Queen's private secretary holding a final veto over their release even after that date. It is entirely possible that they will never be released.

This is wrong. It should not be for the Queen to decide when we can know and have access to critical documents in our own history. We all deserve to know the truth of the dismissal and what really happened at that time.

A team of senior lawyers, working on a pro bono basis, is leading this landmark case which has now gone through the Federal Court, to the full court of the Federal Court on appeal, and now with the success of our application for Special Leave to Appeal to the High Court of Australia, to the High Court itself. This historic legal action is the only avenue available to us to secure the release of the Palace letters, a major piece in the puzzle of the hidden history of the dismissal of the Whitlam government.

Why is this project important?

Australians should own their own history. The decision to withhold the correspondence between the Queen and the Governor-General written at such a significant period in our political history prevents us all from knowing the full story of the dismissal of the Whitlam government.

The release of these letters will be the most significant addition to the historical record on the dismissal since the revelation in 2012 of Sir Anthony Mason's role in the dismissal in the second volume of my biography of Whitlam, Gough Whitlam: His Time, and will fill a critical gap in the historical record about one of the most contentious and divisive periods in our political history. 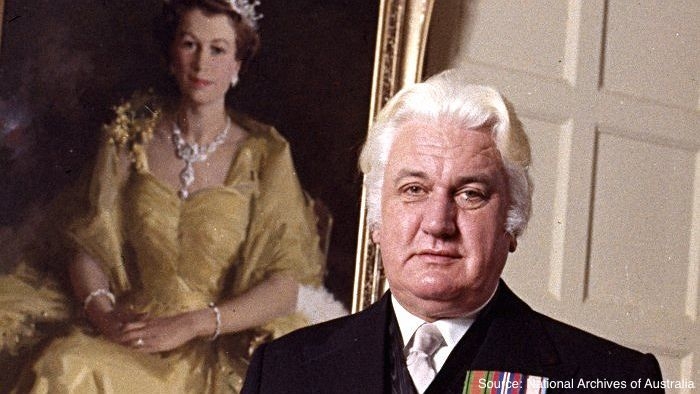 Why I Am Taking This Case

After several unsuccessful attempts to access the Palace letters through the National Archives of Australia, and a Freedom of Information request to the Office of the Governor-General, I decided to launch this unprecedented action as the only way to secure access to this historic Royal correspondence.

In reaching this decision I have been spurred by the generosity and commitment of the legal team and by growing public concern that we are being denied access to our own historical documents at the behest of the Queen.

The case challenges the National Archives of Australia's decision not to release the letters and the categorisation of them as ‘personal’ records. We argue that the letters are 'Commonwealth records' and should be released in accordance with the public access provisions of the Archives Act, 30 years after their creation.

Together, and with your support, we can insist that the full story of the dismissal of the Whitlam government should at last be known.

How the funds will be used?

Your support will enable this case to proceed at the highest judicial level needed for its resolution. The funds would provide some limited protection against possible cost orders and would also cover the non-legal expenses involved in bringing the case before the High Court of Australia. None of the funds would be spent on lawyers’ fees as the lawyers involved have all donated their time to this case on a pro bono basis.

As a private individual without the resources of government, confronting the vast resources of a national institution, your contributions would primarily provide me with some limited protection against any possible cost order. A smaller amount would cover the non-legal expenses of bringing the appeal before the High Court of Australia, including meetings with the legal team and attendance at the court.

This action against the National Archives of Australia commenced in the Federal Court of Australia in December 2016 in an effort to secure public access to the ‘Palace letters’. In March 2018 Justice Griffiths ruled that the Palace letters are ‘personal’ and not Commonwealth records, effectively denying public access to them and continuing the Queen's embargo over them.

In April 2018 I lodged an appeal in the Federal Court against that decision. Prominent Sydney barrister Bret Walker, S.C., led the appeal before the full court of the Federal Court with Tom Brennan, instructed by Corrs Chambers Westgarth, all working at no cost to me.

In February 2019 in a split 2:1 decision the majority of the Full Court, comprising Chief Justice Allsop and Justice Robertson (with Justice Flick in dissent) dismissed our appeal and ruled that the Palace letters are 'personal' and not Commonwealth records.

The Queen's embargo therefore remains in place and the Palace letters will not be released. This continues the long-standing Royal secrecy over correspondence with the Governor-General, regardless of its content, public interest or historic importance.

In his dissenting judgement Justice Flick found that the Palace letters concerned, ‘“political happenings” going to the very core of the democratic processes of this country’, and that it would be ‘difficult to conceive of documents which are more clearly “Commonwealth records” and documents which are not “personal” property’, than the Palace letters.

I spoke to media after the full court's decision, here.

In August 2019 the High Court granted our application for special leave and a great step forward for our case. The High Court appeal will be heard most likely in early 2020 and our legal team of Bret Walker, S.C., with Tom Brennan, instructed by Corrs Chambers Westgarth, will again be presenting the High Court appeal.

I spoke to the media after the High Court's decision to grant special leave to appeal, here.

This case is the end point of many years of research. Its success would mean that the secret correspondence between the Governor-General Sir John Kerr and the Queen, written at the time of Kerr's dismissal of the Whitlam government, will at last be made public. Should the application for Special Leave to appeal be granted, we would expect the appeal to be heard by the High Court in late 2019 or early 2020.

I remain determined to end the Queen’s embargo over the Palace letters and to ensure access for all Australians to her correspondence with the Governor-General regarding the dismissal of the Whitlam government, one of the most contentious episodes in our history. Release the Palace letters!

I am an Emeritus Professor and academic at Monash University, the inaugural Distinguished Whitlam Fellow at the Whitlam Institute at Western Sydney University and have been researching and writing in the area of Australian politics and history for many years. For ten years I worked on the award-winning 2 volume biography of Gough Whitlam, Gough Whitlam: A Moment in History and Gough Whitlam: His Time and it became clear to me that much of what was known as the history of the dismissal was simply wrong. There was a hidden history yet to be told and much of it was found in Kerr's private papers in the National Archives: Kerr's secret interactions with High Court justice Sir Anthony Mason for instance which had been secret for 37 years, were discovered in Kerr's papers and published in Gough Whitlam: His Time.

The Palace letters are of the greatest significance in this still unfolding history of the dismissal of Gough Whitlam. They are the last of the secret documents in Kerr's papers that remain kept from public view. It is not acceptable that the Queen continues to have the final word on whether the Australian people can see such important material that is central to our own history. The Palace letters should now be released. This project will enable that to take place and the history of the dismissal to be complete.

Help reclaim our history! Support an Appeal to the High Court of Australia to release secret letters between the Queen and the Governor-General about the 1975 dismissal of the Whitlam government.

$100 The Dismissal Dossier: the Palace Connection

IF YOU SELECT TO RECEIVE A COPY OF THE DISMISSAL DOSSIER PLEASE REMEMBER TO LEAVE YOUR POSTAL ADDRESS FOR DELIVERY. In this latest updated edition of her acclaimed and compelling political thriller, Gough Whitlam's award-winning biographer Jenny Hocking, reveals the hidden history you were never meant to know about the Governor-General''s unprecedented dismissal of the Whitlam government. What did the Palace really know? Your purchase will support the High Court appeal in Jenny Hocking's case against the National Archives of Australia seeking the release the 'Palace letters' between the Queen and the Governor General about the dismissal. You will receive credit in the publication about the campaign to release the Palace letters and regular updates on the progress of the case. DON'T FORGET TO LEAVE YOUR POSTAL ADDRESS FOR DELIVERY OF THE DISMISSAL DOSSIER