Hello my name is Alex Miller and I am asking you to help me save a unique and threatened African monkey by supporting my PhD research at the University of Western Australia. 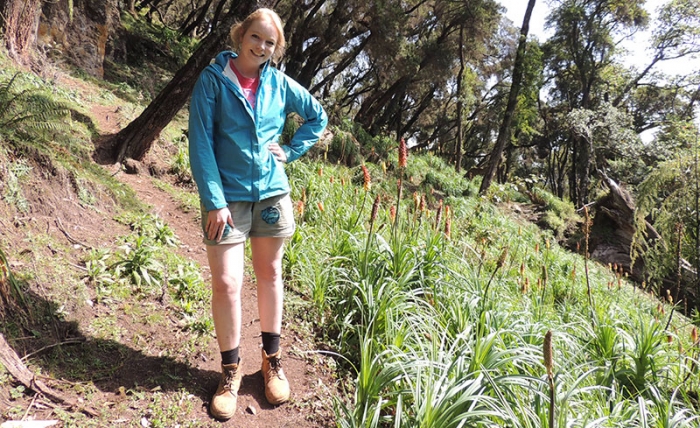 My research focuses on the Ruwenzori colobus which is a charismatic African primate inhabiting Nyungwe National Park in Rwanda. Very little is known about this species' natural history, in particular dietary requirements, social organisation, and environmental pressures threatening their survival. Nyungwe National Park is the only place in the world where the Ruwenzori colobus are known to form unique ‘supergroups’, roaming the forest in groups of up to 500 individuals.

The Ruwenzori colobus monkey is restricted to only a few fragmented sites in Eastern Africa, and is endangered by habitat destruction, encroaching farmlands, hunting within the borders of the park and wood harvesting for cooking and charcoal production. The funding goal of AU $10,000 will cover the costs of field work in Nyungwe National Park for 15 months, including accommodation, food, field equipment, local guide wages, and travel costs. Additional money raised above this goal will be channeled into conservation activities ensuring the persistence of the colobus monkeys as well as the diverse array of other species present. 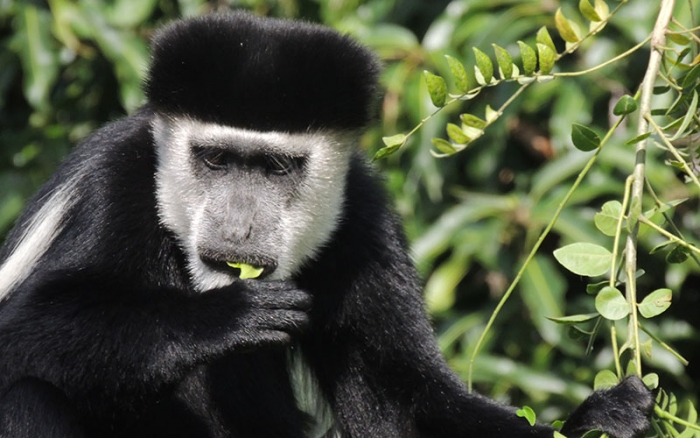 The Ruwenzori colobus is a species of Angolan colobus which is found in eastern Africa, in Rwanda, Burundi, Democratic Republic of the Congo, Uganda and Tanzania. Large groups of this size are a rare occurrence amongst all primates, and supergroups of this size in colobus monkeys have not previously been studied.

Colobus monkeys are threatened across their range in Africa mainly by habitat fragmentation and deforestation for timber. Bordering Nyungwe National Park are intensely farmed agricultural lands supporting subsistence farmers. The persistence of this population is threatened by encroaching farmlands and illegal timber harvesting and hunting within the borders of the Park. Ruwenzori colobus are listed as Vulnerable on the International Union for Conservation of Nature and Natural Resources (IUCN) Red List ranges.

Very little is known about how these large ‘supergroups’ of Ruwenzori colobus monkeys are structured and organised and what resource base they require to form and sustain such large groups. My project aims to understand how these large ‘supergroups’ of colobus monkeys are socially organised. Do they form bands of family units (multilevel societies) like the snub-nosed monkeys in the mountains of China, or do they form ‘promiscuous’ societies of many males and females like the chimpanzees in equatorial Africa? Large ‘supergroups’ generally are sub-structured into smaller family units, made up of a single male and his group of females.

It is thought that the Ruwenzori colobus in Nyungwe NP exhibit this unique form of social organisation, which would be the first example amongst African colobus monkeys. The information generated from this study will answer an innovative research question about a poorly studied monkey. This research will also contribute to conservation efforts and build the capacity of local Rwandan guides, research assistants and students to protect this endangered subspecies.

Why is this Research Important?

The Ruwenzori black-and-white colobus is endangered by future habitat loss, and is restricted to only a few fragmented sites within eastern Africa. Nyungwe NP is the only location where supergroups are known to occur for any of the African colobus monkeys. Nyungwe NP is considered to be one of the largest and most biologically diverse montane rainforests in Africa, and is considered a key area for rainforest conservation in central Africa. A better understanding of the resource requirements are critical for initiating targeted conservation efforts. 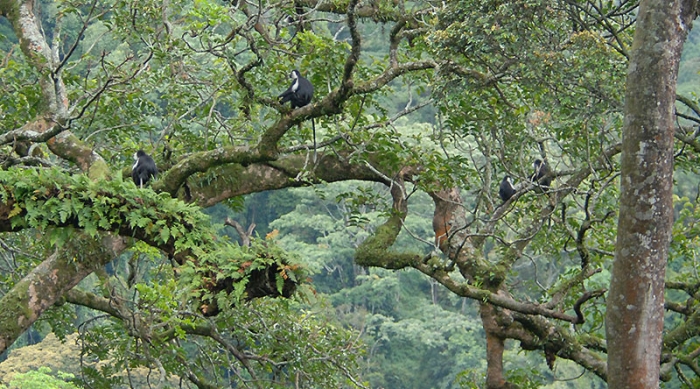 Whilst in Rwanda I will coordinate and teach classes on primate methodology, to increase the knowledge base of local Rwandan students attending the Kitabi College of Conservation and Environmental Management (KCCEM) located on the periphery on Nyungwe NP. The aim is to teach both theoretical and practical classes building the capacity of students to independently conduct studies and pursue careers in wildlife research and conservation.

Students will be taught field methods in order to estimate densities and population size of primates, feeding ecology, primate behaviour, assess forest health and monitor the level of degradation and human-induced impact. This initiative will not only benefit the Ruwenzori colobus monkey but the other 12 species of primates inhabiting the park. By building the capacity for research amongst the local people there will be long-term potential for conservation and research in the area.

How Will I Conduct my Study?

In June of 2016 I will be travelling to Nyungwe National Park in Rwanda to commence 15 months of field work studying these unique supergroups of Ruwenzori colobus in the wild. Nyungwe is renowned for its difficult terrain, characterised by steep slopes, high elevation and distinct wet and dry seasons. 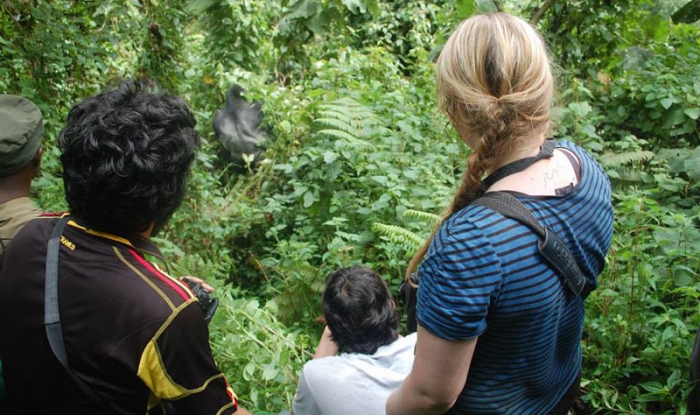 Whilst in the field I will spend a considerable amount of time camping in the National Park, spending 20 days per month trekking throughout the forest following the colobus monkeys. I plan to track the colobus on a daily basis, with field work commencing bright and early at 6am, and continuing through to sunset when the colobus settle into their resting trees for the night. I will record the proximity patterns to shed light on the nature of their social organisation and I will also collect information on the preferred habitat and critical plant species consumed as part of their diet.

My research will reveal a wealth of new information about a scarcely studied subspecies and reveal significant information on the resource requirements and environmental pressures, such as the threat of predators or competing male colobus, which shape and maintain these unusually large groups. All field work will be conducted with the assistance of local guides and research assistants aiming to improve the capacity for research whilst channelling money into research and conservation within Nyungwe National Park. 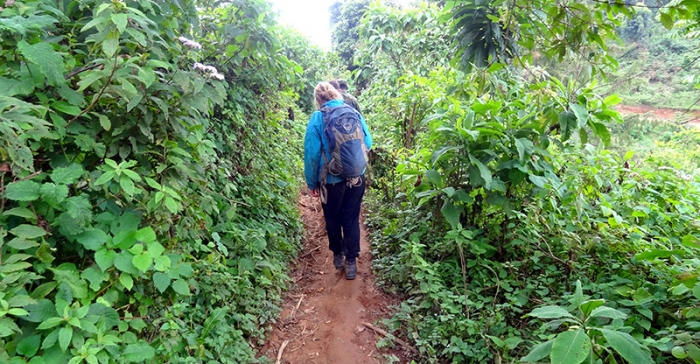 How will my PhD research benefit the Ruwenzori colobus monkey?

My research will reveal a wealth of new information about the scarcely studied Ruwenzori colobus. By studying the resource and habitat requirements for this species we can play a part in conserving this endangered species in the wild, providing targeted conservation efforts. The expected outcomes of my study include the following:

Over the last eight years I have assisted in various conservation projects, namely with a focus on primates, conservation and biodiversity protection. I have fostered good relationships with teams from many countries including Malaysia, Kenya, Mozambique, Madagascar, India, Thailand, Java and Australia. In 2013 and 2014 I worked closely with Malagasy students, local Malagasy guides, international volunteers and research students as a research assistant and subsequently a project team leader in Madagascar, and have experience training local guides in an African country (Madagascar) in scientific research techniques.

Additionally, I have spent many months involved with conservation projects as an assistant primate keeper at Cikananga Wildlife Centre in Java and the Gibbon Rehabilitation Centre in Thailand. I also have extensive experience working with marine turtles in Australia and overseas with Pendoley Environmental in Western Australia and Juara Turtle Sanctuary in Malaysia, surveying remote beaches to count, tag and measure nesting turtles. All of these projects were conservation based initiatives, involving community education activities with tourists, locals and school children about the issues of deforestation, hunting, poaching, pet-trade, sea-turtle harvesting, over fishing, and pollution.

The Ruwenzori Colobus Monkey of Eastern Africa is endangered by future habitat loss. By studying their resource and habitat requirements we can help conserve this endangered species in the wild.

$20 Breakfast, lunch and dinner of beans and rice in the field

$30 Thirty clipboards for teaching activities in the field

$50 Twenty nights of camping fees in the national park

Receive a digital certificate with a photo of a colobus acknowledging your contribution to research and conservation of colobus monkeys, plus monthly updates from the field

Name a colobus monkey in the study group and receive a printed photo of that individual, plus monthly updates from the field.

Receive an acknowledgement for your funding contribution in my thesis and receive a digital copy of the completed thesis.

Adopt an infant, mother + infant, or dominant male and receive a printed photo of your monkey plus monthly updates from the field

$500 Waterproof tent for camping in the national park

Receive an A2 colour poster of a Ruwenzori colobus monkey in Nyungwe National Park + receive a set of 10 cards featuring original colobus monkey artwork from a Western Australian artist + plus monthly updates from the field.

As a thank you for supporting ongoing colobus monkey research and project costs, you will receive all of the rewards listed above. Also, I will be happy to deliver a presentation about colobus monkeys to an organization of your choice (Perth, Australia based only).

Get in touch with Help protect the colobus monkeys of Rwanda