Our economic system is driving us towards a perfect storm. We are facing ecological breakdown. Rising debt is threatening a new financial crash. Inequality is pulling societies apart.

For 50 years, the scientific prestige of the Nobel Prize has given authority to economic ideas at the heart of this system. And even though the stark consequences of the 2008 financial crisis are still felt today, these out-dated ideas remain dominant.

We urgently need to reroute society away from this catastrophic path. That starts with fresh economic thinking.

#NotTheNobel both challenges standard thinking and raises awareness of the new

#NotTheNobel in its first year has in a very short space of time become a phenomenon from a standing start. We gained over 20,000 engagements on twitter, 18,000 views of our video and 16,000 website hits. For the #NotTheNobel prize there were 59 nominations, over 1,000 votes in the final round. And of those who voted at the end, most people thought we should make it an annual prize:

And gave us some great feedback: 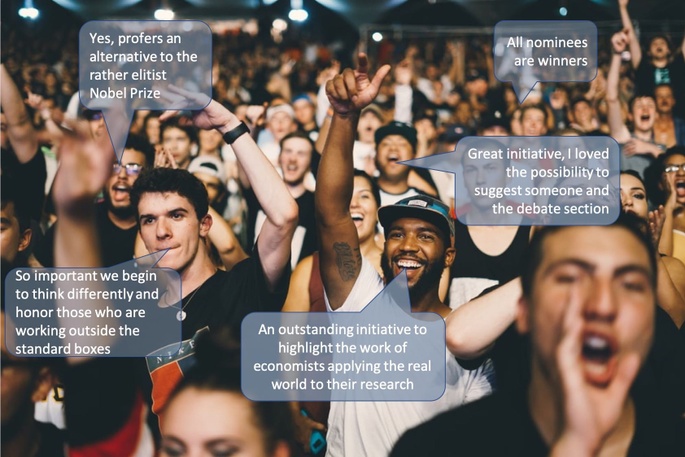 We want to build on this year's success...

We want to make next year's prize more engaging with more events and webinars plus interviews and podcasts. We have now established the concept, have a great set of partners and have got substantial interest. This is a brilliant platform to build on, to raise even more awareness of the range of new economic thinkers and doers to inspire the change we need to address our 21st-century challenges.

But we need your support to increase our impact

Any money you can give us, particularly regular contributions, helps us increase the impact of #NotTheNobel in 2020 by paying for:

All contributors will be mentioned by name (unless you don’t want to be) as a sponsor on our website. You can see our current and past sponsors here who helped us make #NotTheNobel 2019 happen.

All those who give £20 or more per month will receive special recognition on our website as foundation sponsors as this type of regular, predictable, significant donation gives us the foundation to allow us to achieve long-term success.

Promoting Economic Pluralism was born out of a workshop of economic activists in September 2016 including thought-leaders such as Kate Raworth and Steve Keen.

Henry brought them together as he was seeing at first hand working in environmental policy how economic thinking was not opening up in spite of the Crash and student campaigning. Henry had been working to open up economic thinking in environmental policy since he studied economics in the 90s. He believes that we are at a time in history when real change could happen.... with your support.

Nat joined in August this year as programme director. Before joining PEP, Nat worked for over a decade with NGOs such as Global Witness and the Rainforest Foundation tackling the real-world impacts of poor economics and politics overseas. His stories have been reported by Channel 4 News, the BBC, and the New York Times among others and have sparked government investigations or sanctions in the US, Canada and the Democratic Republic of Congo.

Isabel leads on our social media and communications. She has worked in the new economic thinking space for a number of years in Colorado, USA. That work took her to the Wellbeing Economy Alliance where she's assisted in developing their citizens' campaign. She prides herself on her ability to simplify complex ideas and think on a macro-level. She studied at Elon University and currently lives in Nairobi, Kenya.

Steve is our website guru and has given loads of his time for free to make sure our websites look great because he believes in the importance of this work.

And we are working with a great network of partners:

And we do a lot more with whole lot of people....

You can also find about our great trustees, volunteers and more about us here.

There are too many other people to individually name here who have supported us by writing articles for The Mint and speaking at our events.

The same holds true for those who have helped co-create our standards for economic teaching that takes a pluralist approach.

So a big thank you to all the people who have given so much of their time, expertise and talent to get us to where we are now.

Do you feel we are in crisis due to our economic system? Sponsor us to help make #NotTheNobel 2020 happen to find more fresh economic thinkers to address the challenges of the 21st Century.

Get in touch with #NotTheNobel 2020