Shan tried to bring peace to his war-torn country, but his efforts to promote education and democracy made him a target for the Taliban. He fled his country to protect himself and his family.

Shan's journey to asylum and safety from Pakistan to Australia ended in him being forcibly detained in Manus Island. Instead he spent seven years in detention on Manus. He is now in mandatory detention in Mantra Hotel Melbourne Australia. Locked in his room 23 hours a day. A "Hotel California" prison he can never leave. No court can release him. Shan is serving an indefinite sentence for NO CRIME.

There is HOPE. Officially certified as a Refugee, Shan can be privately sponsored by a group of five Canadians and brought to Canada. Shan has fundraised $7000 but needs $12000 more and a group of 5 Canadian sponsors to submit his asylum claim to Canada.

It is possible for you to make his dream of freedom come true by donating, sharing his story or becoming a sponsor and helping him get to Canada.

Growing Up without Parents

Shan was born 1991 in Khyber Pukhonhwah, Pakistan, speaks good English and is educated .Tragically Shan’s father died when he was just seven and his mother died a few years later. His area is a dangerous and volatile area that is plagued by terrorist attacks from the Taliban and other violent groups. As he grew older he became more aware of the violence that affected everyday life, leaving his neighbours dead or injured.

‘There were bomb blasts near our home, shaking the windows and smashing the glass. I saw a man who was killed by the terrorists: his body lay in the street.’

Shan along with other family members joined a party which supports education for all and promote voting. Shan was a vocal and passionate supporter, making him a target for the Taliban. In 2010 Shan joined a team of peacekeepers, defending his village and the local area. He helped to save lives, but this choice led to great suffering for himself. Shan and his family were the target for terrorists and his uncle, aunt and several cousins were murdered.

The Long Journey to Begins

In 2010, after countless threats and attacks, Shan was urged by his family to leave Pakistan. He began a perilous journey, through jungle and across the sea, in an attempt to get to Australia or any country where he could live in peace and continue his studies. Shan crossed the sea in a boat that was old and far from sea worthy. At times the waves threatened to submerge them, he saw other boats sink during the journey. For three days he didn’t eat. Eventually Shan's own boat began to sink but he was picked up by the Australian Coast Guard. Shan thought that at last he had found safety.

Manus Island Papua New Guinea is used by Australia to imprison refugees who arrived by boat. The Australian government calls the place where refugees were locked up as an ‘off shore processing centre’, many others have called it an experiment in the physical and psychological torture of refugees in an attempt to deter others from claiming asylum.

Here Shan was kept in rooms that he describes as being like those used to keep chickens: 4 four men in a 10 feet by 8 feet room with no air conditioning in the punishing heat and humidity of PNG. Many became sick, both physically and mentally and were forced to queue for hours in the sun, to be given nothing more than paracetamol. Food was also used to torment the men; Shan describes queuing for up to two hours only to find no food left or that it was rotten. Water and electricity were frequently and deliberately cut off, at one point leaving Shan and others no choice but to dig a well and collect rainwater. He was sworn at and attacked by locals and beaten with a steel bar by guards. He saw other men die from beatings and suicide.

‘I became old very quickly from the terrible situation, the stress and the tension. I didn’t know when I would ever get freedom.’

Still No Freedom
At the end of 2019 Shan was medevaced from Manus for medical treatment and detained at the Mantra Hotel in Melbourne. He is kept in a small room with one other man for 23 hours a day. He is not allowed out of this hotel prison. No court can release him. After years of neglect and no dentistry on Manus, he has painful rotting teeth and often cannot eat. He has been told that there is no help available for this. He cannot go out in the sunshine or breathe fresh air

Shan has no idea when this indefinite nightmare will end. It’s particularly difficult in these times of the Coronavirus. With no way to isolate or use social distancing, Shan and the other men live in constant fear of the virus being brought into the hotel by the staff.

The Australian government does not have to EVER release him from Mandatory Detention and he is not eligible to settle in Australia or claim asylum. Shan is serving an indefinite prison sentence for No Crime. He has a right under the Geneva Convention to claim asylum, which Australia has signed but does not honour.

"I can't forget my past situations; from childhood till now I didn’t achieve anything. But I know I belong to this world. I will see a new life with freedom and love in a peaceful environment.’

Shan’s dreams are simple. He doesn’t want fame or fortune. He simply wants to live a normal, peaceful life. He wants to start his studies again, learning business studies or sociology. He would particularly like to help children who, like him, have lost their parents. And of course he wants to play cricket again. He has so much to offer the world; he just needs the chance to live as a free man.

You can reach out to Shan in person by email or Facebook.

Funds for Shan will be held until he arrives in Canada by Jill Horton Facebook, Whatsapp +61422619199, jillelizabethhorton@gmail.com.

Stephen Watt, who is a seasoned private sponsor and volunteer in Toronto, reachable by Facebook or email.

We need your help looking for a Group of 5 Canadian citizens or permanent residents to team up to bring Shan to a better life. Before we can submit an application, we need to confirm to the Canadian government that we have funds placed in a secure account and group of 5 to support his first 12 months of life in Canada.

Your donation will contribute to Shan's living expenses for the first year, including:

+Flight from Melbourne to Canada

Every dollar we raise will be held in trust by Jill Horton and will go directly towards Shan's first year of support. When he arrives in Canada, the funds will be disbursed to him immediately, as per the guidelines established by Immigration, Refugees and Citizenship Canada. If Shan is unable to come to Canada or his application cancelled for any reason, your donation will be directed towards the sponsorship of another Manus or Nauru refugee trapped in detention.

NOTE: Shan already has $7,000 fundraised for his sponsorship. With $12000 more, we can submit his application - these are funds he will live on during his first year in Canada. 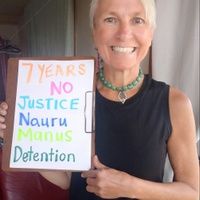 Shan's peacekeeping was a Taliban target. He fled Pakistan then detained 7 years on Manus Island. Now Trapped in Mantra Prison Indefinite Detention 23 hours/day. Canada is his only HOPE for freedom.

Get in touch with Peacekeeper Shan in Mantra's Indefinite Prison