Medical Equipment to Northern Iraq to save refugee & IDP lives

On 3 August, 2014, ISIS moved through the Sinjar area in Northern Iraq, killing thousands of men, boys and older people. ISIS were intent on exterminating the Yazidi people who have lived peacefully in that region for thousands of years.

Between 5000 - 10,000 Yazidi women and girls were taken into captivity by ISIS and sold many times as sex slaves. Approximately 3,000 women and children are still missing, held in ISIS captivity.

The surviving Yazidi families fled to Mt Sinjar - it was summer and many died from dehydration and exhaustion.

Survivors of this genocide fled into Kurdistan predominantly to the Duhok Province. In this province alone 27 camps were established - 24 camps for Yazidi displaced peoples and 3 camps for Syrian Refugees. For over 5 years these people have lived in tents - erected to last 6 months as emergency accomodation during the humanitarian crisis.

In February, 2019 ISIS beheaded 50 Yazidi women who had been in their captivity for almost 5 years. ISIS slaughtered these women before fleeing to escape capture.

Recently Turkey invaded Syria resulting in many civilians being killed and injured. Hospitals have been the target of airstrikes in Syria. It is estimated that 200,000 Syrian refugees have fled - most into the relative safety in the neighbouring Duhok Province in Kurdistan, Northern Iraq.

Medical facilities and Hospitals in the Duhok Province are under immense pressure to cope with the increased need for operations, treatments, births etc due to the huge number of incoming refugees and the internally displaced population. One hospital alone, in this province has over 30,000 births each year!

Our non profit organisation "Operation Hope Australia Ltd" have been working on projects in Kurdistan since May 2017.

We raised $22,000 to fund the building of an emergency field hospital in one of the camps near Mosul in a refugee camp of 10,000.

We raised $6,000 to purchase a transportable office to provide mental health services in a refugee camp of 10,000 refugees.

We raised $17,000 for 25+ operations/treatments for women and children who were injured in air strikes in Mosul.

We spent $A7,000 renovating a medical clinic in a camp near the Syrian border and helped to complete funding for a generator and medical supplies for the pharmacy in the medical centre.

We funded a 40ft shipping container filled with humanitarian aide and medical equipment that was distributed in 2019 into camps and medical facilities and Department of Health hospitals in the Duhok province, Kurdistan, Northern Iraq.

We have just purchased another 40ft shipping container to be filled with donated medical equipment. Packing of the Shipping Container has commenced and initial contents include:

We have arrangements with the Department of Health in Duhok province, Kurdistan for our equipment to be distributed into their hospitals in this region. Medical care at these hospitals is free for the refugees and internally displaced people living in this province.

The cost to purchase and transport a registered 40 ft shipping container, from Botany Bay into Duhok, Kurdistan is approx $A20,000. This cost covers the construction of wooden crates to protect the valuable equipment and the cost to transport all the donated medical equipment from regional NSW hospitals to the shipping container for packing. This cost also covers the border and customs fees (except if there is a delay).

We need your help via financial donations so that we can complete the journey of this precious load from Australia into Kurdistan for distribution to start saving lives as soon as possible.

We are happy to receive donations of decommissioned medical equipment in good working order (no medical supplies or medication) that we can prepare for shipment. Our biomedical technician ensures every item is in good working order and changes power cords etc so that the equipment is put to use as soon as it arrives at the hospitals. If we can raise extra funds we will purchase consumables - cables, tubing, batteries as we did with the last shipping container project.

Donations over $2 are tax deductible.

Donations up to Wednesday 18 December:

Christmas Gift Cards from Operation Hope Australia can be mailed to you for donations in multiples of $25. These gift cards are a great gift for family and friends - the gift that gives twice.

Simply choose the Perks option and include your postal address. 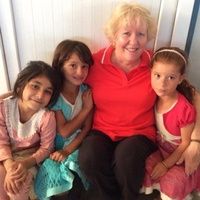 Buy Christmas Gift Cards you can give to your family and friends for $25 each. All donations are tax deductible. Please make donation prior to Wednesday 18 December to allow for receipt prior to Christmas Day. 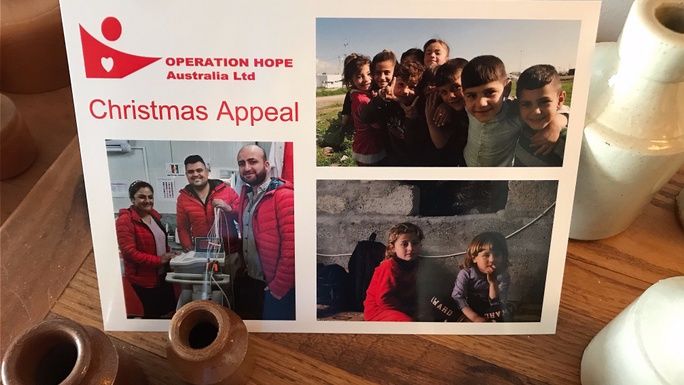