We're delighted to announce the official number of train posters for our #LetsMakeLondonVegan campaign...

As of December 19th, there will be **2,500 posters** in the train carriages on the London Underground! This is an additional 500 extra posters than our initial crowdfunding target, and that's all thanks to your awesome generosity and fantastic support!

The posters will feature Rocky the calf, Ernie the piglet or Little Eric the chick, and you'll be able to join in the supporting social media campaign from wherever you are in the world. :)

Thank you for giving Veganuary 2017 the biggest head-start! You can help to #SaveRocky, #SaveErnie and #SaveLittleEric now by encouraging family and friends to try vegan with us in January. It's completely free and they can sign up today: Veganuary.com/register 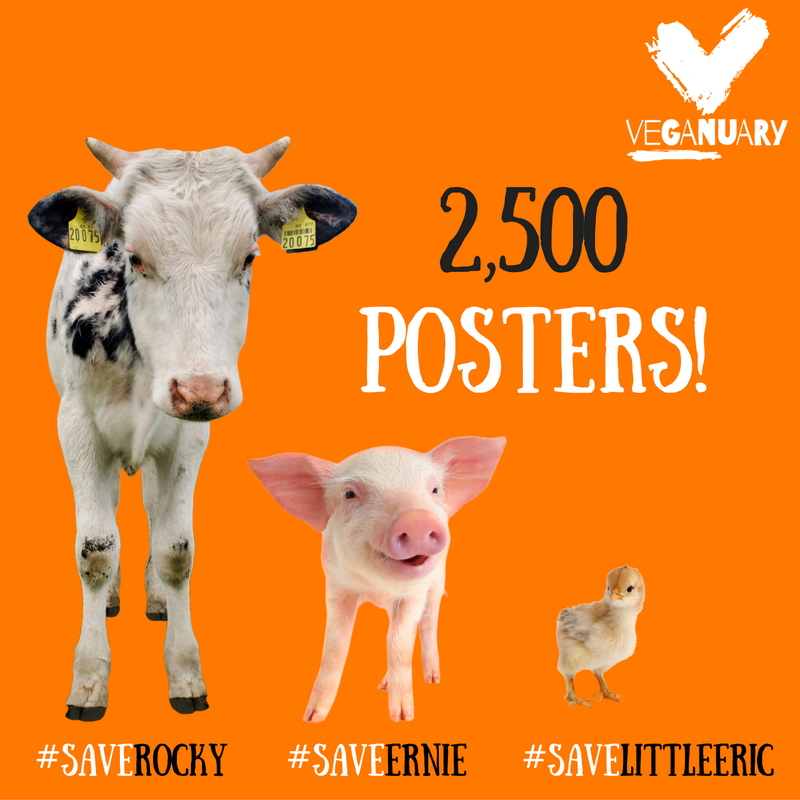 Two weeks ago, late at night, the Veganuary team visited a pig farm... We wanted to see for ourselves what life is like for farmed pigs.

This farm was chosen randomly – a small, local farm in Yorkshire (UK). We entered through unlocked doors and took all the necessary biohazard precautions.

The farm was filthy. In every shed we found dead piglets – maggots and rats attacking their little bodies. In the only shed where we saw living piglets, many were obviously dying; unable to find warmth and with no strength to suckle. Their mothers were locked in ‘farrowing crates’, unable to turn around or help their babies. (This is completely legal and means the piglets are forced to fend for themselves because their mothers cannot fulfil any natural, maternal instincts.)

Our combined actions can prevent more animals from suffering in this way. Individually we have a choice, and collectively we have the strength to change things for the better. Every piglet we saw that night was just as sweet and innocent as Ernie in this campaign, and just as deserving of life.

We have less that two days left on this crowdfunder... How many more train posters can we secure in that time? Every person who tries vegan in January will make a difference. For Ernie. For them all.

(If you find watching a video too difficult then you can read about our experience here.)

AMAZING NEWS! One very kind and generous donor has pledged to match all donations (from this point on) up to the value of £5,000! There has never been a better time to support this campaign, as your donation will be doubled!

It costs £12 to sponsor a London Underground poster, and this donation-match pledge means that one poster will automatically become two. Two for the price of one! What could be better than that?

Can we turn 2,000 posters into 2,500? Thanks to this unexpected donation-match we're in with a chance! Please continue to support and share this history-making campaign. We are still receiving messages who have only just found out what we're doing... Your social media posts are making a difference! Thank you :)

Thanks to your amazing support and generosity, we hit the £24,000 target on our #LetsMakeLondonVegan Underground Campaign with 12 days still left to go on the crowdfunder! And donations have been coming in steadily since...

This will be the BIGGEST vegan campaign ever featured on the London Underground.Thank you for being part of history! 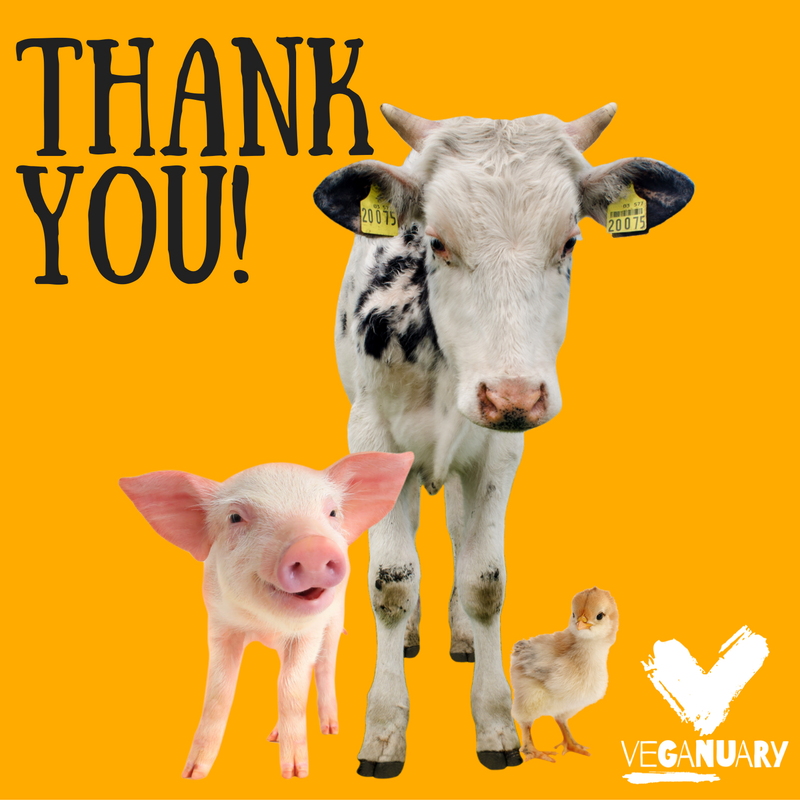 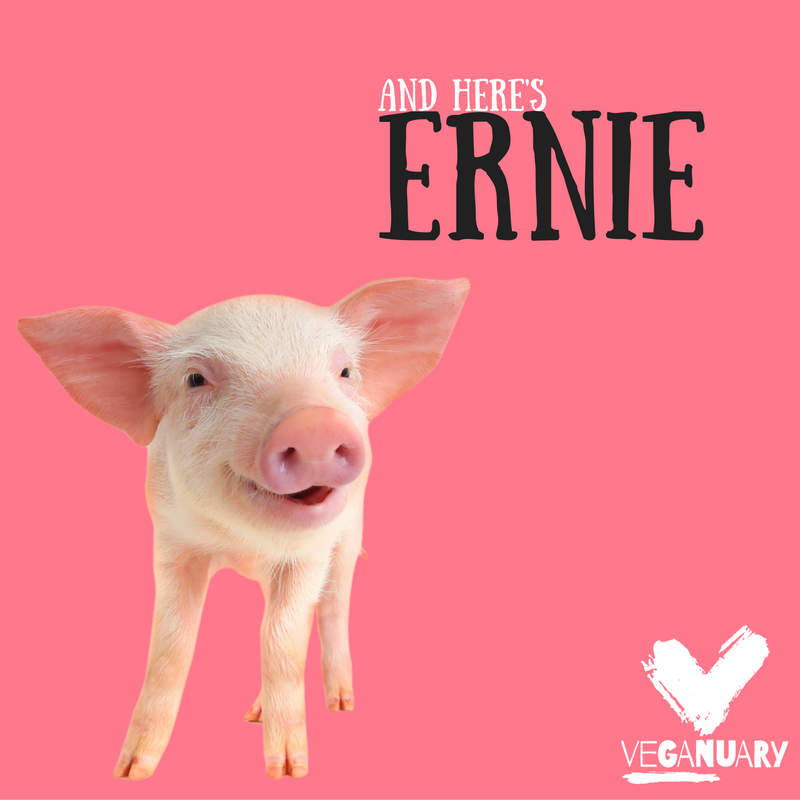 Ernie’s a very cheeky, very clever little pig! He loves to play and go exploring with his brothers and sisters (they’re his best friends). When he’s a little bit older, he’ll learn his own name and recognise lots of other words too.

But Ernie has been born into the meat industry, so he’ll be killed long before then…

Help us tell Ernie’s story. Please continue to share this campaign on social media, and pledge your support for #LetsMakeLondonVegan.

You don’t have to be in London to be a part of this! Get involved on social media from December 19th with the hashtags #FindErnie and #SaveErnie

We've just hit 1,920 tube posters (out of a 2,000 poster target)... Talk about a Happy World Vegan Day! Please keep sharing & supporting. How cool would it be if we could hit our target? Today of all days!

This is Little Eric... 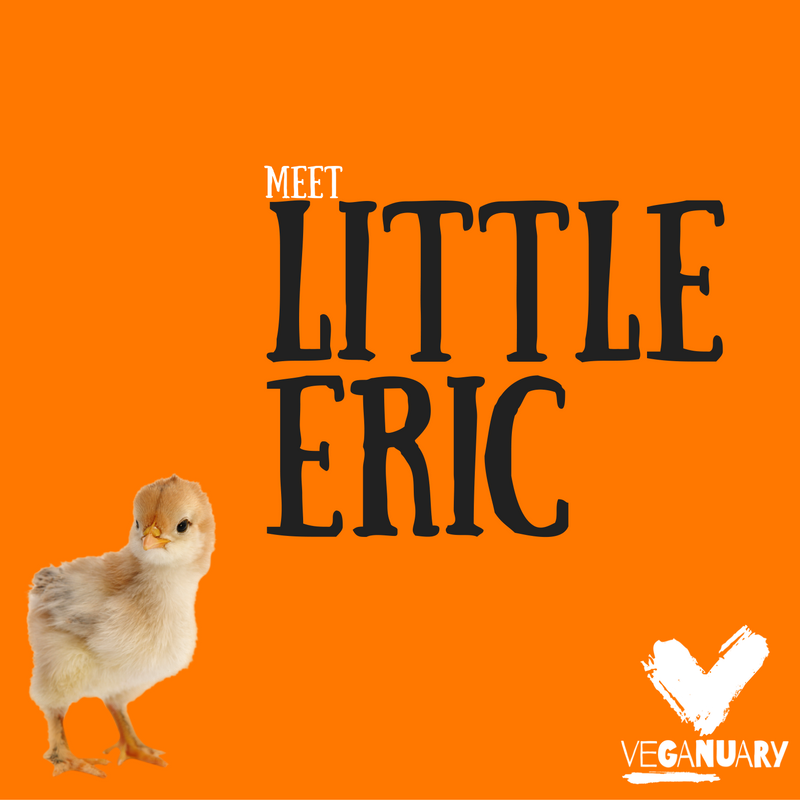 Little Eric’s a clever wee guy! His mum started talking to him when he was still in his egg, and he recognised her as soon as he hatched; just by the sound of her voice!

But Little Eric has been born into the egg industry so, tragically, he’ll never get a chance at life…

Help us tell Little Eric’s story. Please continue to share this campaign on social media, and pledge your support for #LetsMakeLondonVegan.

PS - You don’t have to be in London to be a part of this! Get involved on social media from December 19th with the hashtags #FindLittleEric and #SaveLittleEric

Thanks to your amazing generosity, we've already secured 1,643 tube poster adverts for our #LetsMakeLondonVegan campaign!

Thank you to everyone who has shared this campaign or sponsored an ad! We're so excited to see this campaign becoming a reality :)

Please continue to share this link and tell other vegans about what we're doing. We're so close to our 2,000 poster target, and it only costs £12 to sponsor a tube poster! 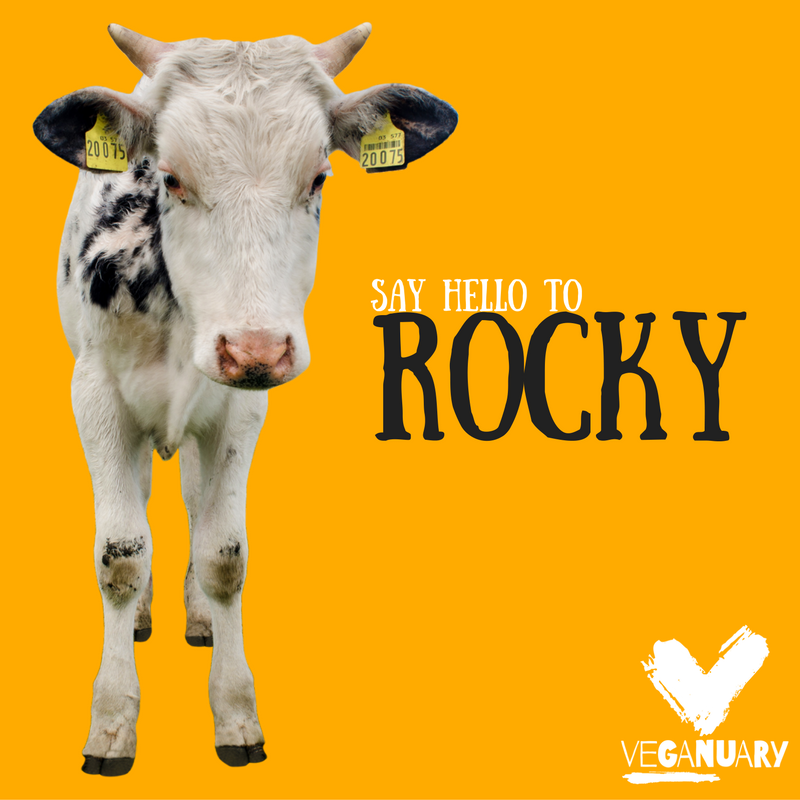 Rocky’s a friendly little guy who’s just starting to explore the world. He’s playful and inquisitive, and would really like to become best friends with another little calf. But Rocky’s mum is a dairy cow, and his world is about to be turned upside down…

Help us tell Rocky’s story. Please continue to share this campaign on social media, and pledge your support for #LetsMakeLondonVegan.

PS - You don’t have to be in London to be a part of this! Get involved on social media from December 19th with the hashtags #FindRocky and #SaveRocky

Simply amazing folks... After just five days, we're already over £12,000! We're so grateful for all your support, enthusiasm, pledges and messages.

Please keep sharing this link on social media. If we keep up this momentum, we'll be guaranteed 2,000 adverts in no time!

Suggested tweet: "Sponsor a #Veganuary tube poster for just £12 & make your mark in the history books. #LetsMakeLondonVegan everyone! https://chuffed.org/project/lets-make-london-vegan" 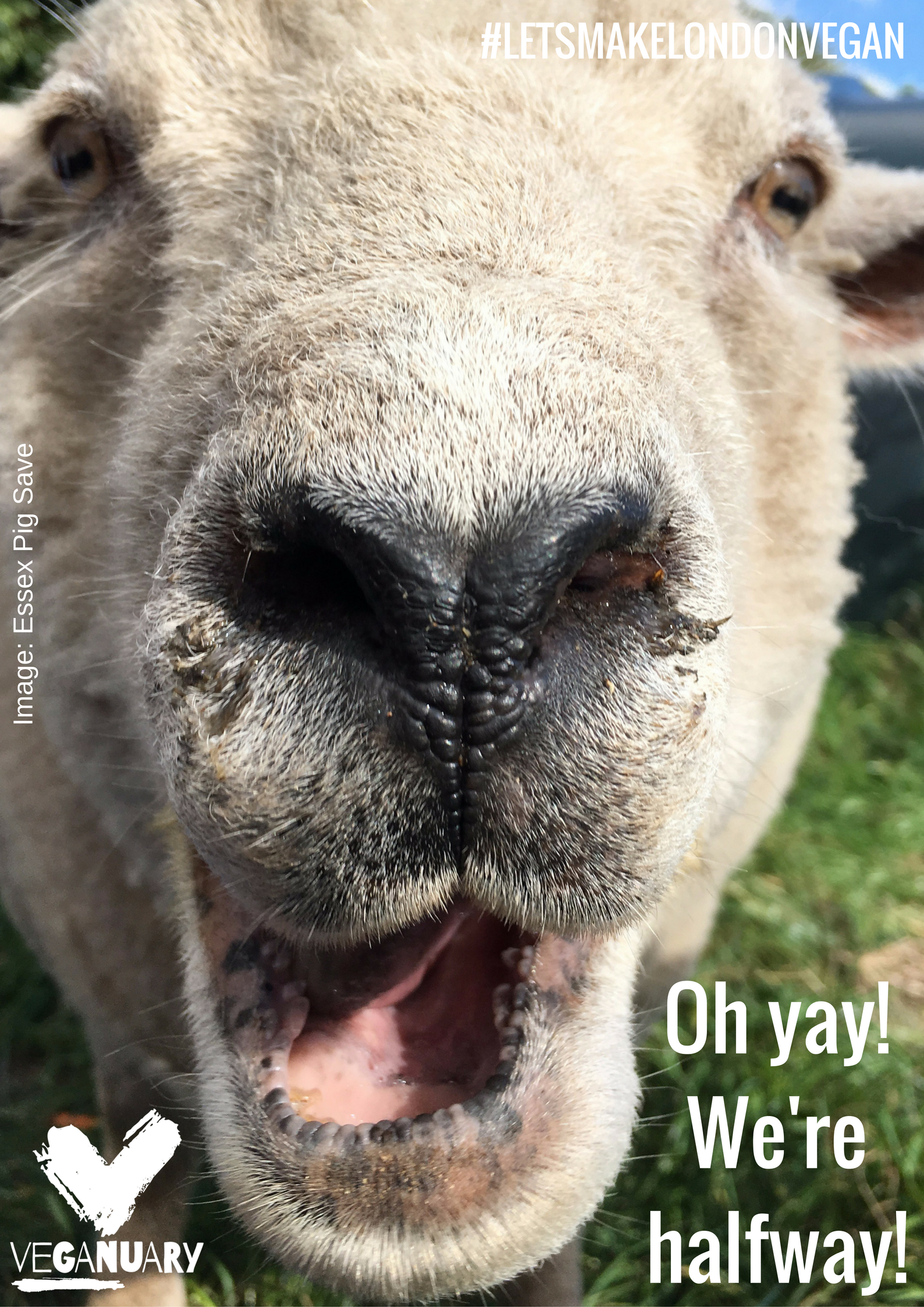 Launched in 2014, Veganuary (pronounced vee-gan-uary) is a charity that encourages people across the globe to try vegan for the month of January. Over 40,000 people have taken part, and for January 2017 we're aiming for an additional 50,000.

Veganuary is fresh, friendly and fun. Veganuary.com is innovative and comprehensive; providing honest, clear, and expert advice to users in a non-judgemental and supportive manner.

Our approach works! In the February 2016 Participant Survey, 81% of respondents said they were intending to stay vegan. In our follow-up survey of August 2016**, 63% of respondents confirmed they identified as vegan, and a collective 79% said they planned to eat vegan in the future.

What's more, 99% of 2016 participants said they'd recommend us to family and friends, and 63% of the August survey respondents reported having inspired at least one other person to go vegan (since taking part in Veganuary 2016).

[** To view these results in full please click here.]

What do we want to do?

For Veganuary 2017, we are launching the biggest vegan campaign ever promoted on the London Underground. Between December 19th and January 2nd, there will be 2,000 adverts inside tube carriages, encouraging people to sign up for Veganuary. This will:

The tube provides a huge, captive audience who have time to read and consider our messages. Plus they'll see them over and over again!

Why do we need your support?

Because a campaign like this costs money. A lot of money. But this is money well spent. Every day the London Underground plays host to 3 million passenger journeys, with 150,000 people entering the network every hour. This gives our campaign enormous reach. The more people who know about Veganuary, the more people we'll see pledging to try vegan with us in January! In addition to this, tube commuters are exactly the sort of people who take part in Veganuary (we know this through our sign-up and survey data):

To show our thanks... 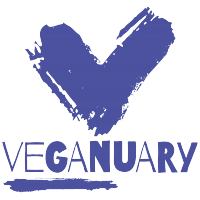 Support Veganuary's London Underground campaign and encourage thousands more to try vegan in January 2017! Together we can reduce the suffering of millions of animals. #LetsMakeLondonVegan

Your £12 donation will pay for 1 x poster advert in a train carriage!

Your £24 donation will pay for 2 x poster adverts in the train carriages!

Receive your very own video message from the people behind the Veganuary campaign!

Are you a vegan business? We'll add your profile to the Our Supporters page on Veganuary.com for one year!

Your £60 donation will pay for 5 x poster adverts in the train carriages!

Dinner at a top London restaurant... Vegan of course!

Your £120 donation will pay for 10 x poster adverts in the train carriages! Plus you'll receive your own little slice of history with a glossy print of one of our London Underground campaign adverts.

Your own little slice of history! Receive two of our London Underground campaign adverts as printed posters to display in your home or business.

Your own little slice of history! Receive all three of our London Underground campaign adverts as printed posters to display in your home or business.

Fancy being wined and dined by Team Veganuary? Then this is your chance! (Location options: London or York, UK)

Find out what goes on behind the scenes at the world's biggest vegan campaign! Become a member of Team Veganuary for a day. Travel (within the UK), accommodation and delicious vegan food provided.

Get in touch with Let's Make London Vegan!