I'm Nikita Woolfe, I am a campaigner and a filmmaker. I believe film is a great way to open up discussion and create awareness around an issue. 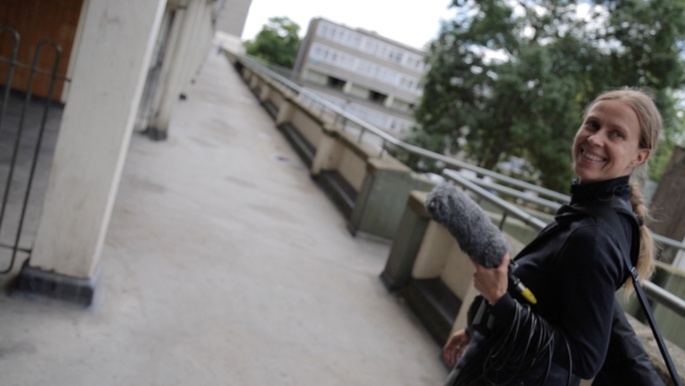 For the past 3 years I have been working on finding out more about the whole 'housing' crisis. And what I found was really amazing. Basically the UK could easily stop the crisis if they really wanted to. Here are a few basic elements to start with:

Close the loophole in the Viability Assessment for developers.

- find your own piece of land where no one lives!

This is what we want to get across to both the Government but also to people like you and I, because when people know what to ask for, they will ask....

My film 'Concrete Soldiers UK' explains the situation. It shows how bad the situation is and it gives answers to many of the questions people have. Andy (campaigner and narrator of CSUK) and I have been talking to people and it's obvious that most people know about the crisis but they do not know HOW to change things or even how to start thinking about changing the status quo. We want to help them....

Since the 1980s the picture of social housing has changed dramatically in the UK.

An erosion of funding has altered the outlook for hundreds of thousands of people, who used to rely on councils and the government believing that it was good for society as a whole to provide affordable rented housing, 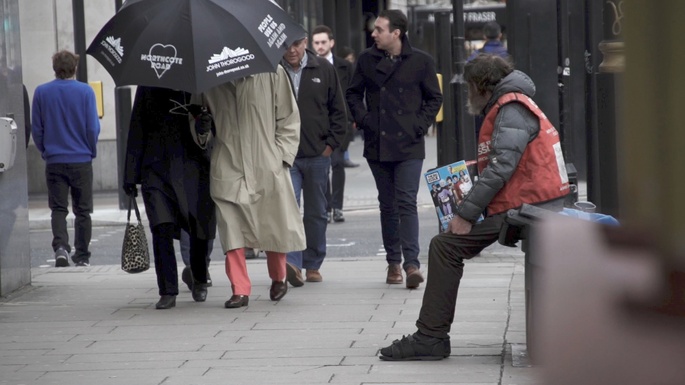 ..but there’s a problem

The Councils have stopped listening to the plight of the people and are now demolishing huge swathes of publicly-owned housing estates against the wishes of most residents. They are destroying homes and communities in order to finance their own deficits. But it’s a false economy.

Our film 'Concrete Soldiers UK' shines a light on an issue of unparalleled importance to millions of people, but which is not generally given the exposure it deserves in the mainstream media: the housing crisis, which is not really a crisis of supply but of affordability. The film argues that only by investing in our social housing, and not tearing it down, is the UK ever going to build itself up again.

The film uncovers the truth behind the Grenfell Tower disaster and paints a compelling picture of the many circumstances that people find themselves in because they live on a condemned housing estate.

This is happening all across the UK and it will only stop when enough people ask to make it STOP!

We contact tenants' organisations and community halls across the Uk. Then we arm ourselves with a projector, a screen and some speakers. We are now a mobile walking cinema! That’s it.

We go out into the community, screen 'Concrete Soldiers UK' and share what we have and what we know, whilst recording people's experiences and successes.

On our return we then put together a handbook - a collage of KNOWLEDGE. All about regeneration and about fighting the social cleansing of our cities.

The important bit: We take experiences from across the UK!

Other handbooks have been made from London experiences check this one out: link - but what we want is an EASY guide with loads of pictures and charts and graphs, which can navigate you through the maze.

Our handbook will have notes about the best lessons learned, potential pitfalls to watch out for and simple diagrams of how to start and what to do.

The 'Concrete Soldiers UK' handbook, called INSPIRE 2 RESIST, will be available free online or given out in booklet form (if we get enough funding) . 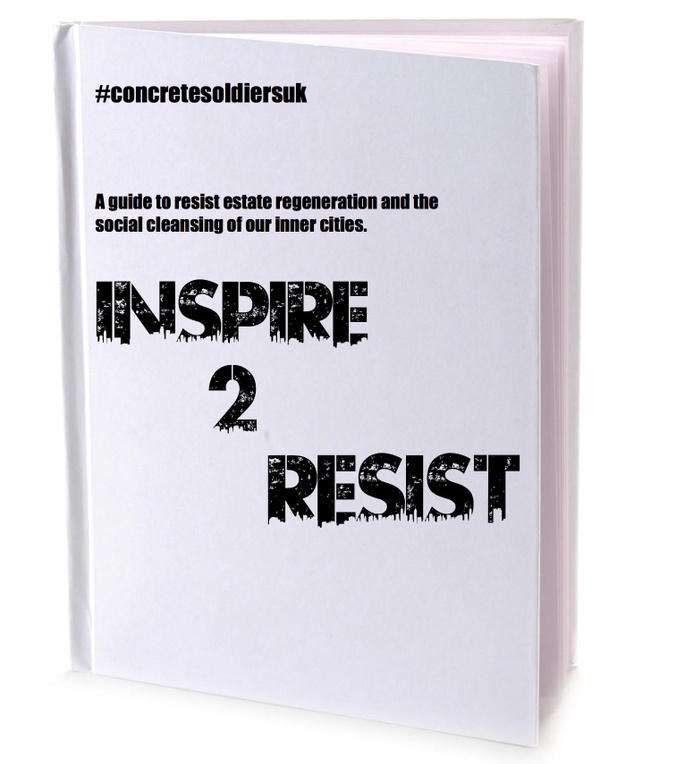 The BUDGET - and an explanation of what it is for

We are hoping that people will want to make sure this project will happen, but in order for it to be successful we need firstly to pay for our travel and accommodation as well as the cost of portable projection equipment, admin costs and printing costs. Then we need to make sure that the mobile walking cinema - us! - can sustain ourselves whilst touring. And then we need some time to collate and design the handbook.

Where does your money go?

If we reach this target before the camapign finishes we are going to raise the target a bit so we can afford to print the handbook and send it out.

For 1000 copies of the handbook it costs:

We aim to visit at least 15 different places around the UK, as well as covering London as extensively as possible. That’s at least 8 hotspots around the UK, using the larger cities as branching-out points.

Once we have pinpointed the exact places where regeneration is rife we can contact groups in the area and start booking the venues. 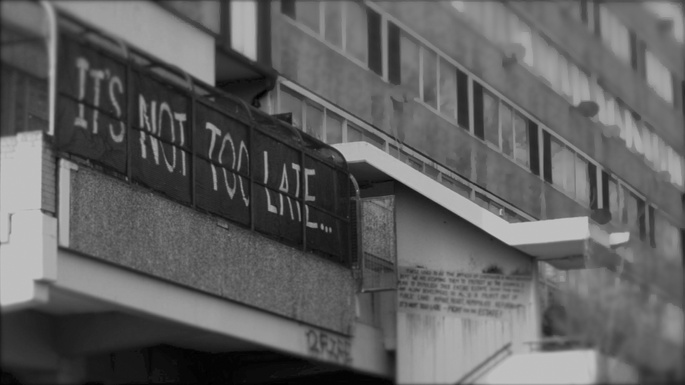 You can join us.

Why SUPPORT THIS CAMPAIGN?

Tired of just standing by and watching social housing being destroyed?

If you support this campaign you know that people across the UK will be informed of the scale of the crisis whilst being inspired to stand up and fight.

"After watching 'Concrete Soldiers UK', I left the theatre very emotional and very angry. I wanted to go out and shout about all the injustices in this film. Watch it, it's powerful stuff."

“Film is incredibly democratic and accessible, it’s probably the best option if you actually want to change the world, not just re-decorate it” Banksy, artist

Here's a trailer for the film

Read more about the film @ www.concretesoldiers.uk

“I work to change systems, especially the social order which we have so readily accepted. If my craft can help make issues less unfathomable, I am one step closer to my aim.”

Nikita’s background is as a cinematographer and editor working mainly in drama. She’s worked in a variety of production roles in independent film & TV.

She was DoP on the short '14', which was Bafta-nominated in 2010. Her student film 'Roy Eastend Boy' won the Exposures Grand Jury Prize and Best Documentary in 2007.

Andy is an independent journalist, and a campaigner on human rights and social justice issues. He has become an integral part of the campaign and will take part in the screening tour and creation of the handbook.

Since 2006, Andy has been writing about the lawless US prison at Guantanamo Bay, and working to get it closed down, and he is also involved in social justice issues in the UK, as the author of two books about the British counter-culture, and as a journalist, campaigner, photographer and musician. As a long-term resident of social housing, he is passionate about its future, and, as well as saving estates from destruction, he hopes to see a mass movement for the creation of new, genuinely affordable social housing for all.

Read more about Andy and his work here: http://www.andyworthington.co.uk

#SUPPORTERS of the campaign and the documentary

The amazing graffiti artist ‘The Artful Dodger’ has donated designs for the campaign. He has designed our 'Concrete Soldiers UK' logo. See: http://www.focusldn.com/interviews/artfuldodger

The great musicians Sid Goldsmith and Jimmy Aldridge have donated their song ‘Moved On’ to the film. It’s become the signature song for the film. Listen to the song and more of their music here: http://www.jimmyandsidduo.com

The amazing Rafal Patrick Arciszewski, has composed the soundtrack for the film, which will be available for download later in 2018: https://www.engineheart.co.uk

“Like all art, non-fiction film should invite, seduce, or force us to confront the most painful, mysterious or frightening aspects of what we are. This makes activism possible, but it is not the same as either activist journalism or activism itself.” Joshua Oppenheimer, filmmaker, The Act of Killing

And here’s some amazing perks for supporting us

- Everyone who donates to the campaign will receive a free handbook via an online link.

Plus you can choose to:

Watch 'Concrete Soldiers UK' from your own cosy couch.

Or receive an invitation to an exclusive screening in Central London.

Or maybe receive some intensive training from the Director herself of how to make films that matter.

Alll this and more is available - check it out.

Tired of just standing by whilst other people fight for their communities? Do you want to make a difference? Support our #INSPIRE2RESIST campaign!

‘Help me shout about the housing crisis, empower the people in need and stop rich developers getting richer…'

Get in touch with # INSPIRE 2 RESIST - Inspiring Resistance through Film