Australians are sick of partisan politics and a Parliament that's not representative of the community. Women for Election Australia is a non-partisan, not for profit organisation that provides training and support for more women to enter public office.

Gender inequality in Australian politics has significant implications for our nation’s wellbeing. Australia has one of the highest education rates of women globally, yet an astonishing low number of women in senior political roles. Ranked 43rd out of 187, Australia sits behind New Zealand (9th), Uganda, Zimbabwe and the Philippines on female political empowerment. Women comprise less than 30% of MPs and 22% of Federal Cabinet, a downward trend since 2008.

Having so few women at all levels of government means that women are subject to major decisions that impact them substantially but have little or no voice to effect change. The full-time gender pay gap is approximately 18%; women earn roughly 82% of a man’s pay. The active participation of women in decision-making at all levels of public office is essential to ensure that vital legislation affecting women, children and families is passed, supporting a viable future for all generations. Beyond policy decisions, Independent research shows[1] that women in positions of authority tend to work more collaboratively across parties, and be more responsive to their constituents.

Women for Election Australia is holding training programs to inspire and equip more women in Australia to run for office at the local, state and federal level. These events will be promoted widely to women from diverse communities as it's critical that our Australian Parliament is representative of the very voters they serve.

Women for Election Australia needs to raise $30,000 AUD to help subsidize training for 300 women to stand for election in Australia. As a not-for-profit organisation, our group is reliant on donations to survive and thrive. With your help, we can improve the current landscape of Australian politics. Only through the Australian public witnessing a more representative government can a sense of trust be restored in the Australian political process. 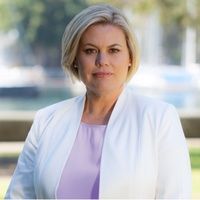 Women for Election Australia is a non-partisan group raising money to help subsidize training for 300 women to stand for public office in Australia. We need your help to improve Australian politics!

Get in touch with Australia Needs more Women in Parliament!