click play button on above image for pitch video!

Elephants are among the most intelligent and social creatures on this planet. They have the same number of spindle cells in their brains as humans: these are the cells related to our social emotions such as compassion, embarrassment, and grief. An elephant feels as deeply as any human being.

They are also a keystone species to the survival of the African jungles. Those jungles are critical carbon sinks for this planet and their biomass is washed out to the oceans where it provides nutrients to the plankton which produce oxygen for the whole world.

Global warming is causing greater desertification of the African continent. This means traditional grazing territory, that is fertile because of the elephant's presence, is taken over for farming and exacerbates the desertification process. When elephants and humans alike begin to starve, things spiral out of control.

In Syria and Burundi farmers have moved to cities sparking civil unrest. When this happens in African countries elephants can be seen as sources of food and money. They are slaughtered wholesale for their meat, and their ivory is sold to crime cartels in order to buy guns. Another source of income is taking big game hunters out to kill for an elephant trophy. 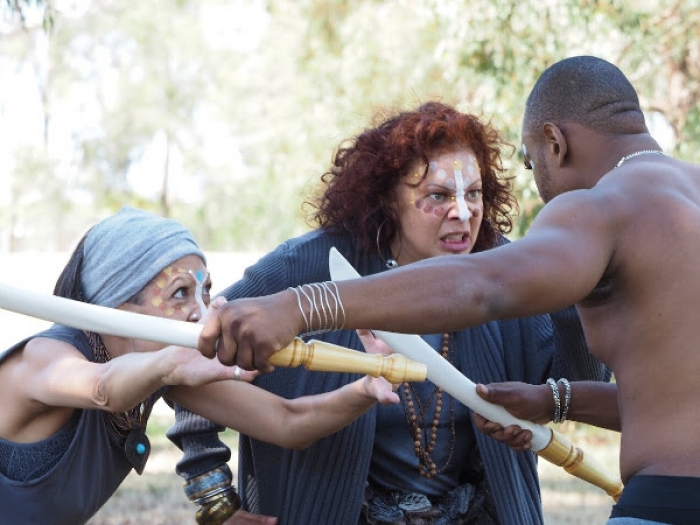 We need more people across the globe understanding the elephant's key role in the survival of ourselves and the planet. Gaining people's empathy with these creatures, emotionally engaging them with what it is like for an elephant to live under these pressures, can go a long way toward inciting people to action.

Theatre has been scientifically shown to be one of the best ways to gain the empathy of students. Being in the physical presence of actors portraying the reality of various circumstances makes a mark on people. But you may think, how much help can that be when it's only one show in one area for a couple of weeks?

Our modern solution is to create a piece of musical theatre that will be made available to professionals, community groups, students, etc via Creative Commons. Anyone anywhere will be able to put our show on in order to raise awareness and to raise funds for elephant causes! We will even be making our prop construction methods open-source to help with other's productions. 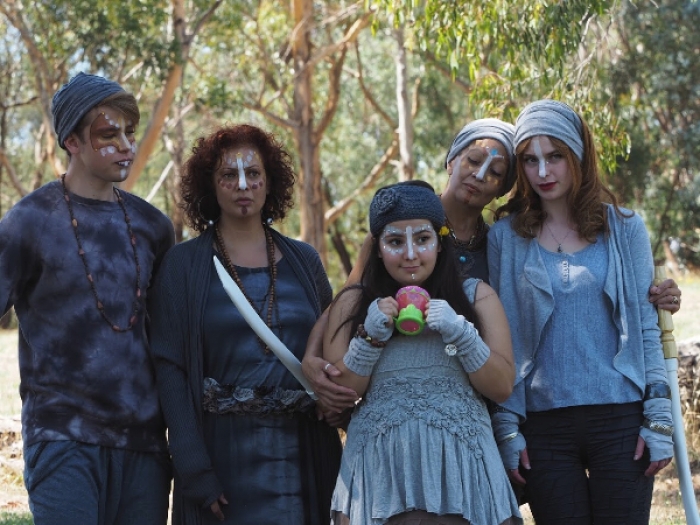 Our musical Heard of Elephants is already written and the songs are all ready to be sung. We even have a complete and utterly awesome cast! The story will follow the lives of a family of elephants for one year and the park rangers who look after them. We will have birth, deaths, encounters with other animals, and poop-cam!

This musical is something like a cross between Lion King and Fiddler on the Roof. Only our elephants are represented by people dressed up in baggy gray hip-hop gear wearing tribal makeup!

What we still need are things like set and prop building, theatre rental, marketing, and poop-cam (a Roomba we have programmed to run around on stage filming the elephants).

Test version of one of our songs!

Hear from our cast!

You know you want the world to see how much you love elephants! 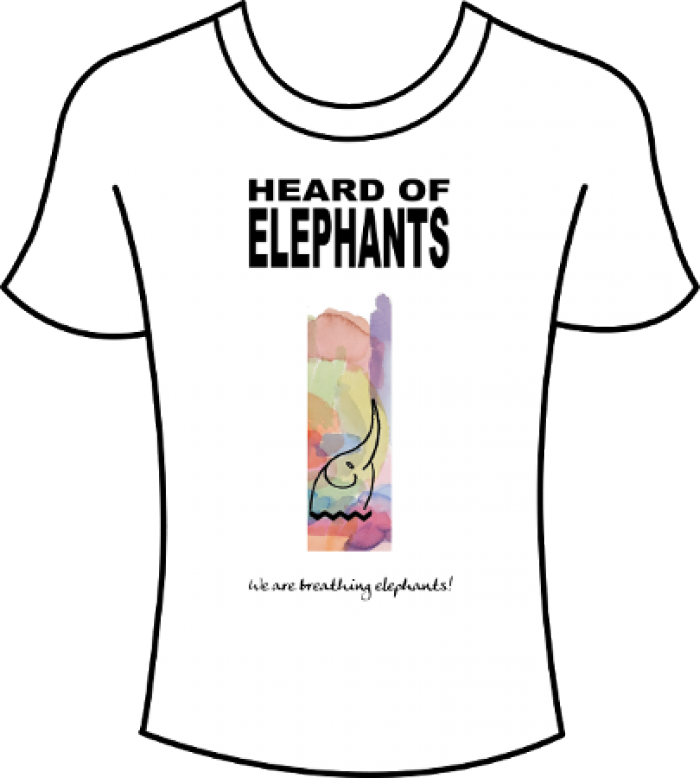 You can choose between two pre-matted art prints! 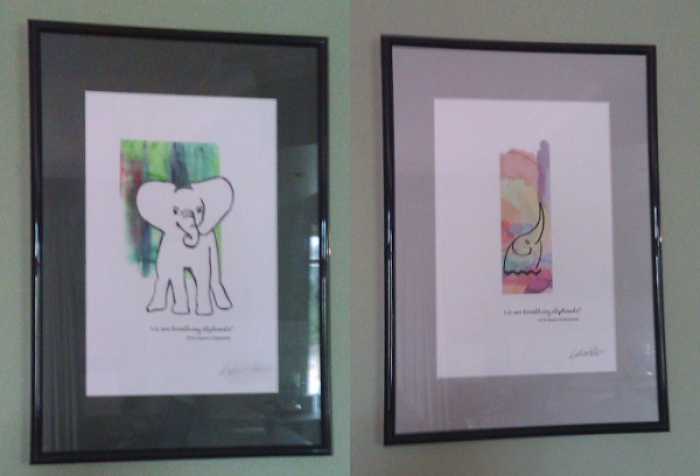 Tickets to the show!

ZOMG! You definitely want to see and hear this dramatic musical spectacular! 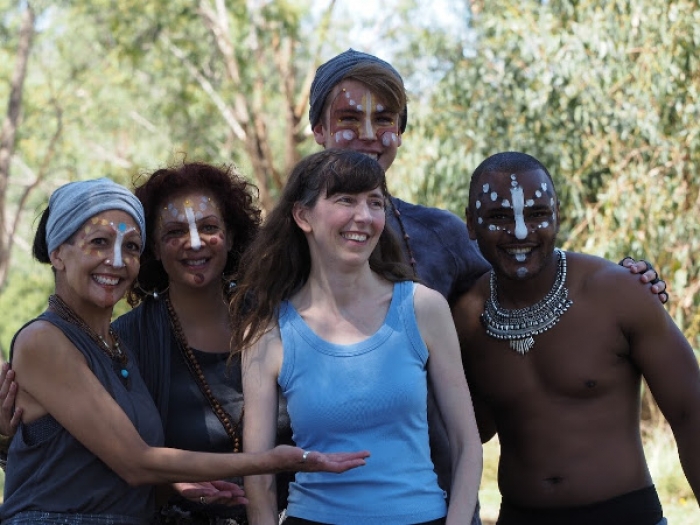 Theatrical production and CD of music

Add ons if we reach our stretch goals

More about Heard of Elephants and Glass Wings Productions here: 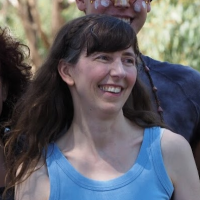 Heard of Elephants is a musical about elephant conservation. It's also a tool that other groups will be able to use to raise awareness and funds for elephants when it's released to creative commons!

You are the large-hearted friend who gives what they can and goes from being invisible to visible! ~Name in program and Website as a backer.

You bring great joy to the world, especially the elephants! Your colourful personality makes you loved by all! ~Name in program and Website, and 3 elephant badges!

Your love for our elephant friends is great. You are here to help our show to fly! ~Name in program and Website, 3 elephant badges, and a T-shirt!

You are the grand protector. You help the very small to be heard, for in fact their message is very large! ~Name in program and Website, 3 elephant badges, a T-shirt, and a ticket to the benefit performance!

Like Manny the woolly mammoth you are large of heart. You understand why it is critical to preserve elephant-kind! ~Name in program and Website, 3 elephant badges, a T-shirt, a ticket to the benefit, and a matted art print!

You are a leader and know what's what: and that's looking after the welfare of our elephants! ~Name in program and Website, 3 elephant badges, a T-shirt, a ticket to the benefit, and 2 matted art prints!

You are a king or queen of conservation. You bring great wisdom to the campaign to save the elephants! ~Name in program and Website, 3 elephant badges, a T-shirt, 2 matted art prints, a VIP double pass & seating at the benefit!

You are a philanthropic God! Your benevolence inspires awe in all who know you! ~Name in program and Website, 3 elephant badges, a T-shirt, 2 matted art prints, a VIP double pass & seating at the benefit, a tusk scimitar signed by the actors, and a private dinner with the director!

One ticket to see Heard of Elephants at the benefit!

Get in touch with Heard of Elephants