'From Hell to Hell' book printing

'From Hell to Hell': poems from immigration detention

Due to the harsh regime of secrecy surrounding Australia's immigration detention centres, it is rare to hear first-hand accounts from people who have survived years behind the fences. It is particularly rare to hear stories from within the Australian-run offshore detention centres on Nauru and Manus Island. What we do hear often comes from whistleblowers breaching contracts and deeds of confidentiality to speak out, rarely do we have the opportunity to hear from the people detained inside our centres. Despite this, it is clear that there are countless voices longing to escape the fences that confine them. Ravi is one man who is willing to speak out about what happened to him. After travelling to Australia from Sri Lanka by boat, Ravi was detained in the Nauru Regional Processing Centre and Melbourne Immigration Transit Accommodation for over three years. He is now living in the community and has published a collection of his poems written from within our detention centre system. Ravi's poetry and drawings can be seen as forms of art - literature in and of themselves - however his work can too be perceived as an action of resistance.

Ravi's poetry has touched hundreds of Australians but still needs to reach many more...

Ravi has launched his book in Melbourne, Sydney and Perth. He has travelled across the country sharing his experiences and shedding some light on his journey 'from hell to hell'.

He has said "I am a person who was forced to face the inhuman and unjust policies for such a long time...my heart was crushed by these all things and each night my tears makes letters, then the letters gave me my beautiful book "FROM HELL TO HELL". I used the tools I have to express my feelings so I can reach the real Australians - now it's going to be your turn to feel that..."

Printing his books and travel expenses, however, have proved more costly than anticipated. The demand for his books is high and he is constantly receiving requests for copies, however having sold out a month ago, many opportunities to spread his work further have been missed.

In light of the funding issues that Ravi has experienced, we've decided to crowdfund the cost of printing 1000 books. This will allow Ravi's insightful and haunting poetry to reach 1000 more people. Amplifying the voices of those who have firsthand experience of the detention regime is critical to generating greater awareness, understanding and ultimately social change.

We need your support!

All funds raised will go towards printing books. The money subsequently raised from the sale of these books will in turn be used for further printing, with excess going to supporting people who remain in immigration detention, along with the writer himself. Your donation will allow Australians to hear the voice of someone who experienced the reality of 'offshore processing'. You can help end the secrecy that enables abuses in detention. 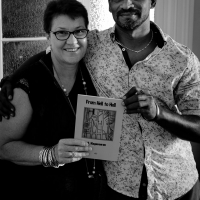 Help Australians gain insight into the experience of being detained on Nauru. Amplify Ravi's voice by contributing to printing costs for his book!

Free book for all donations over $50.

Est. Delivery Date: Within 2 weeks of the target being reached.
20 claimed
None left

Get in touch with 'From Hell to Hell' book printing