French and other languages below.

Who are the Haratin?

The Haratin are the largest minority in Mauritania, numbering about 40% of the population. Of black heritage, they are seen as the lowest caste and are heavily discriminated against in Mauritanian society. Until this day, Haratin women and children are born into slavery! Although slavery was finally criminalised in 2007, it is so deeply embedded in society in the government fails to enforce anti-slavery laws.

Besides, the government does not recognise the Haratin as full citizens and makes it incredibly difficult for them to obtain ID cards, which in turn prevents them from being able to access schools through normal channels. Consequentially, many Haratin women and children are poorly educated and illiterate.

How can we help them?

Providing former slaves with an education has proven to be one of the most efficient ways to fight slavery in Mauritania. Because, even if slaves are released or manage to escape, the lack of economic opportunities and the ongoing social discrimination often force them to go back to their masters. That's why the fight against slavery in Mauritania has to touch on the most fundamental of needs: To provide alternative economic opportunities for people born into slavery - especially women and children. 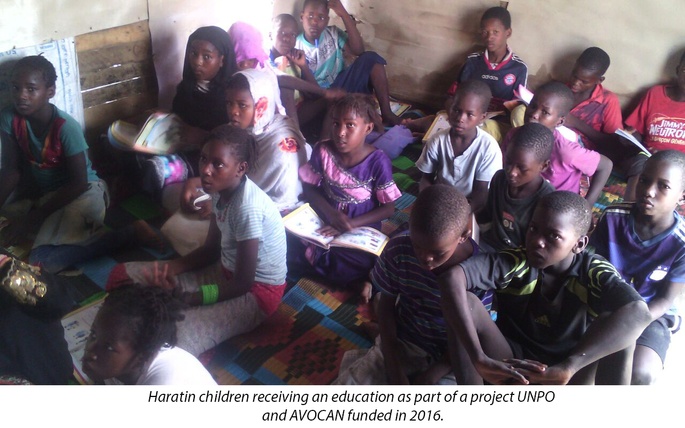 With YOUR help, we want to do the following:

Your donation will have a tangible impact on the lives of former slaves.

Who's behind the campaign?

Julie, Tommaso and Markus work for the Unrepresented Nations and Peoples Organization (UNPO), which is supporting indigenous peoples, minorities and unrepresented territories in the fight for their rights. Together with our local partner organisation AVOCAN*, UNPO is struggling to end slavery in Mauritania since 2011.

*AVOCAN is an association working in the field of social development to the benefit of underprivileged and vulnerable citizens in Mauritania. It aims to raise awareness among the public, private and public institutions, humanitarian organisations and other opinion leaders about the necessity of supporting the youth in areas where they suffer from analphabetism and ignorance.

We want to fight slavery and social vulnerability by providing Haratin women and children with an education. Help us reach our target so we can provide courses, books and build a classroom.

Get in touch with Education Spells Freedom