Confusing Them With Our Joy

Metgasco started exploring for unconventional gas (fracked coal seam gas, tight gas, shale) in the Northern Rivers of NSW, Australia, in 2008. After Josh Fox's film Gasland came out, people around the world became alarmed about the risks, especially to water, and in 2012 the gasfield-free community movement began in the village of The Channon.

A series of spectacular marches, meetings and blockades culminated in the first major win by a community against corporate and government-backed invasive gasfields in mid-May 2014, at Bentley, near Lismore.

We were closely involved in this entire struggle as film-makers, photographers and musicians. After Bentley, we worked on other gas, coal and climate campaigns around the country. 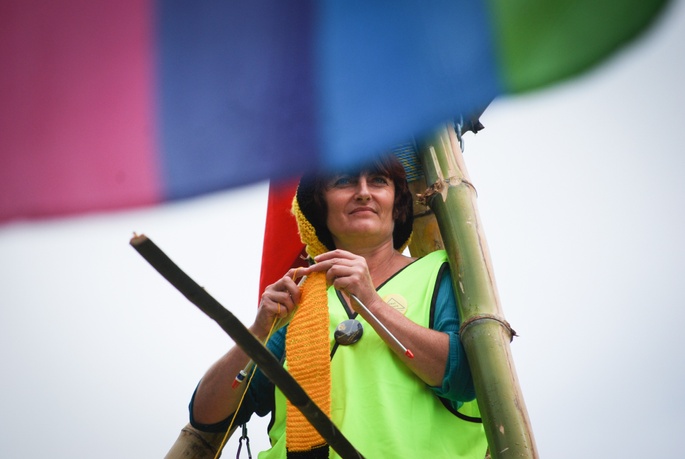 Apart from roadblocks in the Northern Rivers, Gloucester and Victoria, the unconventional gas industry has gathered pace pretty much everywhere, especially in Queensland. Metgasco received millions of dollars of taxpayers' money to continue plundering beyond NSW, and Bentley was soon forgotten by the mainstream media.

Today the story isn't widely known. It has been dismissed as something that could only have happened where it did, which we believe is wrong.

The warnings of the artists and activists who played such a big part in this historic victory need to be heard, and the lessons of the Northern Rivers' win for the wider fight against fossil fuel expansion, and the accompanying mega-catastrophe of climate change need to be amplified. 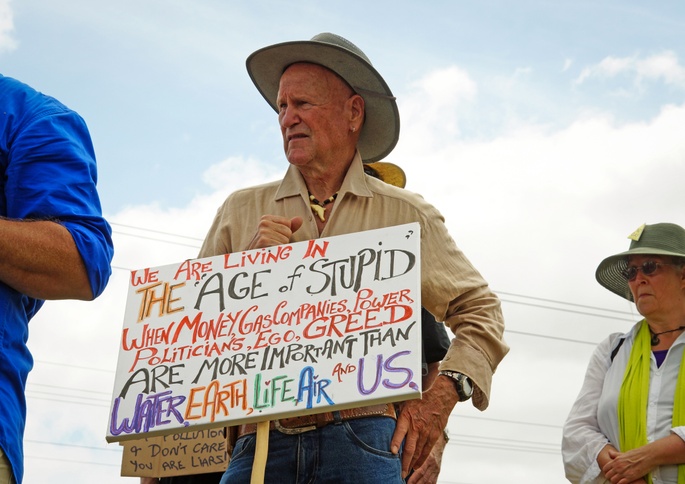 Cloudcatcher Media to the rescue

Confusing Them With Our Joy has been in gestation for many years. Our original plan was to make a three hour film trilogy but it became clear that the experience needed more depth, not more length.

Films are limited in impact by their budgets and increasingly viewed alone, on small devices. This is a long way from the ancient magic of a community around a campfire, which was at the core of the Bentley thing.

We want to regain that feeling with an interactive, two-hour live experience which also uses the latest immersive multi-screen video technology to give audiences fresh insights into the key moments, empowering them to take the lessons of this struggle into the future. 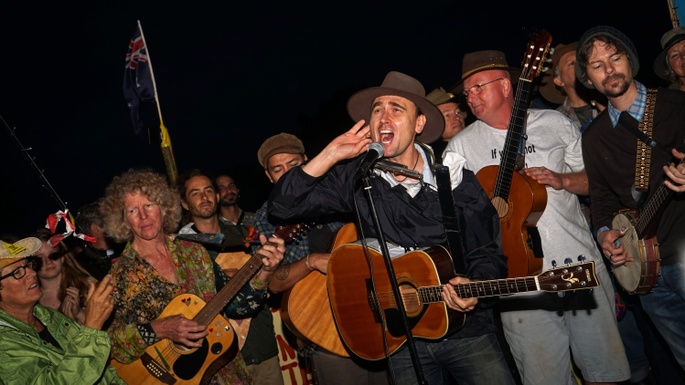 The musical spine of the show will be the extraordinary songs of Luke Vassella, the bard of the gasfield-free struggle. Luke will perform live with musical support.

Visual elements will be drawn from the best of Cloudcatcher Media's vast archive of video and stills from five years of actions, many never before seen, and none presented like this. 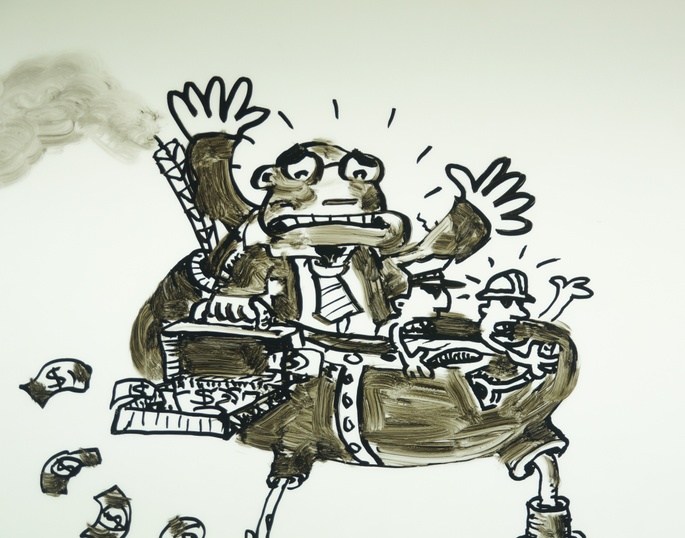 The work of regular Cloudcatcher Media collaborators Peter Gibson (animation) and Duncan Wilson (aerials) will be featured alongside an array of other talented artists and activists.

We will celebrate the spirit of resistance while acknowledging that community resistance is never easy. We'll be more interested in how things felt and what they meant than this-happened-and-then-this.

Confusing Them With Our Joy will dig into the deeper problems beneath the gas. We will explore how the fossil fuel crisis is a microcosm of bigger and deeper problems which are rarely black and white. 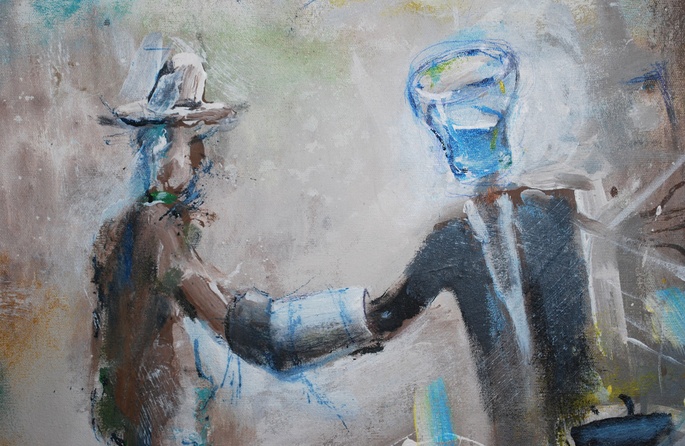 The show will be directed by David Lowe and produced by David, Eve Jeffery and Luke Vassella. [Please check out our Vimeo reel for award-winning films from the Cloudcatcher Media team].

do not be confused!

Confusing Them With Our Joy will be an emotional blend of documentary, music and comedy. We will premiere on the fifth anniversary of the Bentley victory, in 2019. 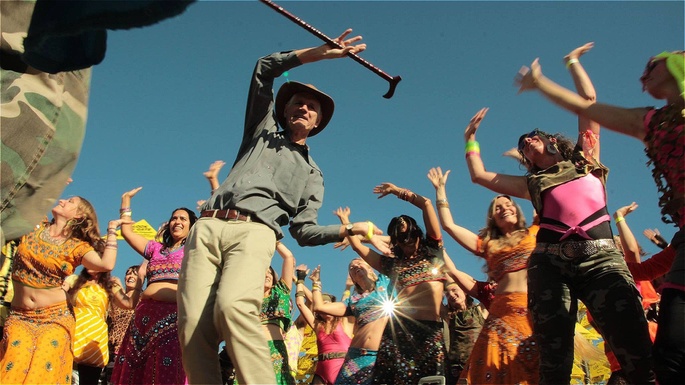 Imagine three big screens (with a collective ratio of 48:9, twice as wide as Cinemascope) separated by two musicians. Sometimes the three screens will function as one big panoramic screen, sometimes left and right will mirror with something different happening in the middle, sometimes each screen will display different but related images.

The audience will have to choose what to look at, which will give the experience something of a VR quality but without needing special glasses.

The show will be designed to be fully scaleable, so that it can be performed anywhere from community halls to large open spaces. 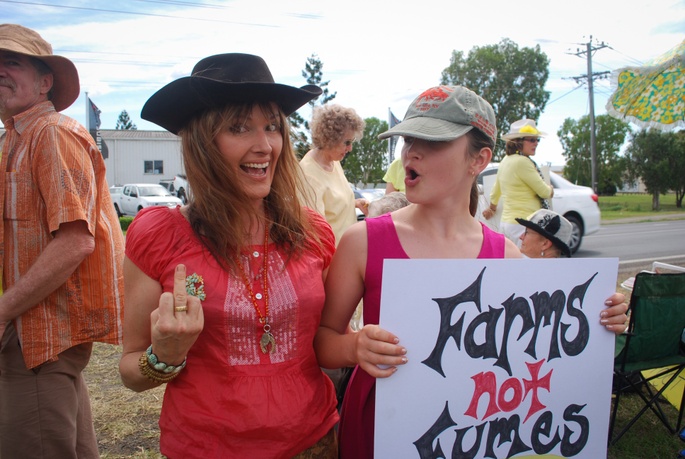 Specially recorded comedy sequences and newly shot material about Luke's own journey – and the challenge of climate change – will link the personal with the universal and the regional to the international.

Confusing Them With Our Joy will underline the extraordinary strength that lies in diversity. 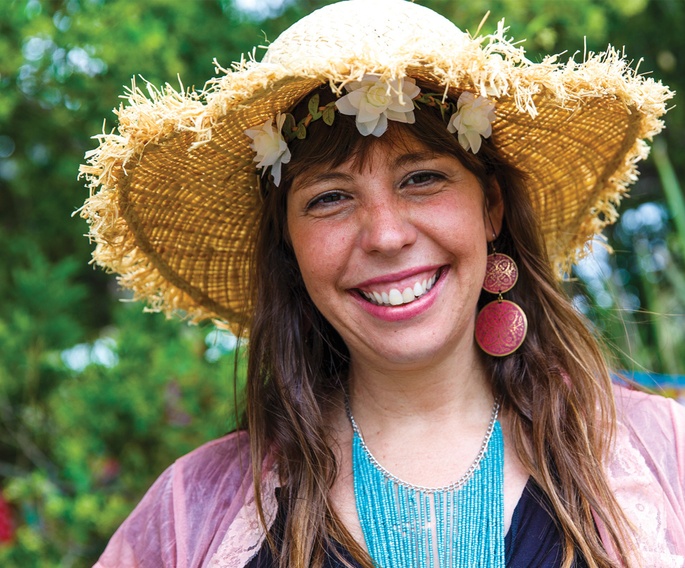 We'll be developing new technology and approaches to take advantage of the three screen display, repurposing old footage and songs to take audiences inside the experience, and creating new sounds and images for maximum emotional impact and understanding. 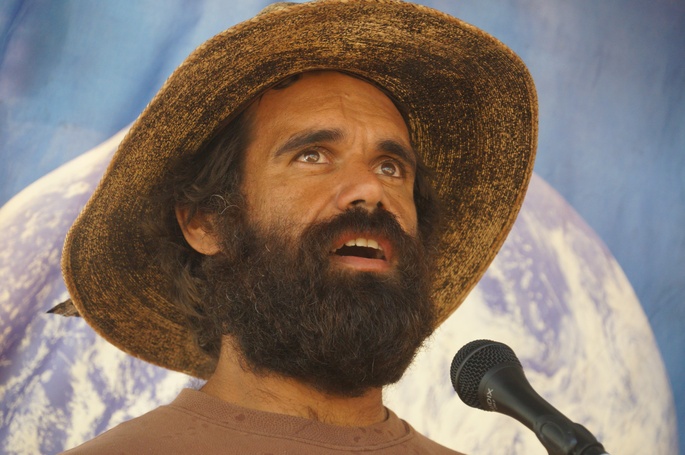 We've calculated that to pay the micro-team for shooting, editing, production and duplication, and to get the equipment we need, will cost $30,000. That's with everyone working at barebones hourly rates.

If we receive less than that, we will create a smaller show and do a shorter run. If we get a higher budget, we will make Confusing Them With Our Joy more spectacular and take it further. 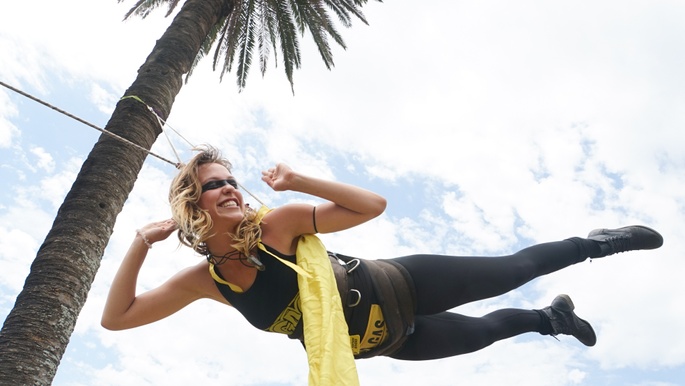 our project IS its perks

Instead of just putting your name in a small font at the end of a long credit roll, our project IS its perks. That means you can help us create the project by buying your ticket/CD/DVD in advance. 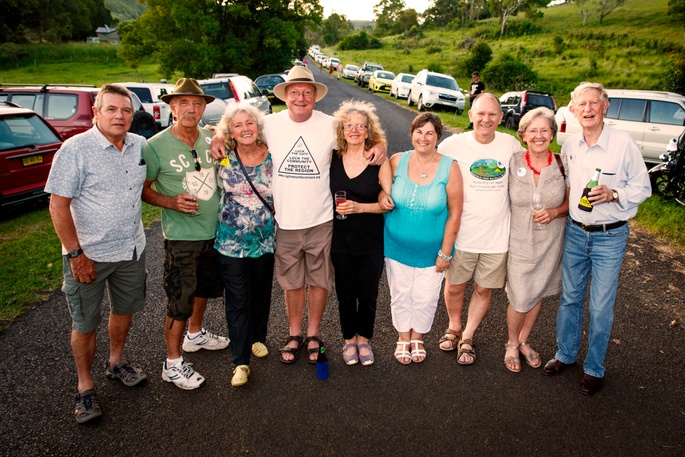 This will be a touring multimedia show about a community which refused to become a gasfield. With live musicians and immersive multi-screen technology we ask; what did we learn that might help other communities? Can we fight the global struggles we all face with humanity and art and joy? 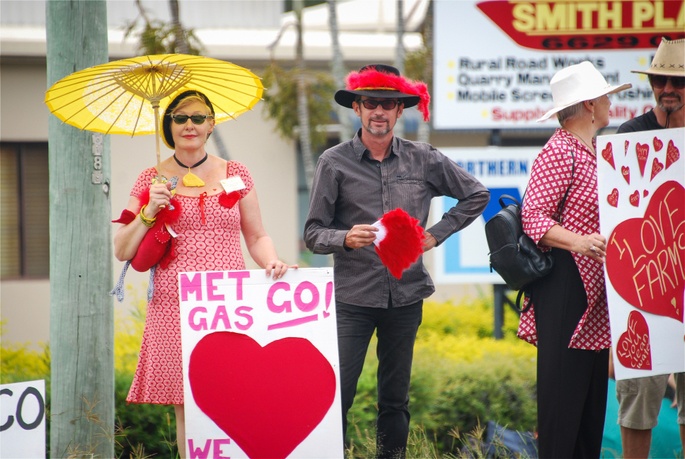 This is a live, musical multimedia show about the NSW Northern Rivers' victory against invasive gasfields and what it means for everyone's future. Three big screens, one epic story. Confused yet?

$30 Confusing Them With Our Joy Double CD

Listen to Luke Vassella's extraordinary work on the Confusing Them With Our Joy double CD.

Select
$30 Confusing Them With Our Joy Live Multimedia Performance

Be part of the audience for the Confusing Them With Our Joy live multimedia performance – premiering in Northern Rivers NSW in 2019, on the fifth anniversary of the Bentley victory, performances in other areas to follow pending demand.

Select
$30 The Confusing Them With Our Joy Performance DVD/Bluray

If you can't get to the Northern Rivers, or you want a souvenir to re-live the magic at home, the movie version of the live Confusing Them With Our Joy performance will be available on DVD/bluray/streaming two months after the live premiere

Confusing Them With Our Joy T-shirt

Choose from one of 100 different posters featuring various combinations of confusing characters from the saga. There might even be a poster featuring you!

Two reserved seats at the Gala Premiere event, plus nibbles, drinks and meet the creators.

Two reserved seats at the Gala Premiere event PLUS a Double CD and DVD plus nibbles, drinks and meet the creators.

If you just want to help us make this show and receive none of the other awesome pre-sale items, you can buy a $50 Warm Inner Glow here or go back to 'donate now' to support us with any amount from $5 to sky's the limit!

Get in touch with Confusing Them With Our Joy