“We should never lose sight of the fact that we have the right to protest” – Bendigo magistrate.

Central Victoria Climate Action is raising funds for court costs. A Bendigo magistrate has ordered that charges be withdrawn for two dads charged with trespassing in the office of Nationals Senator Bridget McKenzie. The group was staging a mass occupation of her office in May 2017. They were drawing attention to the Coalition government’s intention to loan $1 Billion of taxpayers’ money for the Adani mega coal mine.

Local solicitor Bill O’Donnell declared the case “a win for the democratic right of citizens to approach politicians for legitimate reasons”. Because this important democratic principle was at stake, Mr O’Donnell who has worked pro bono for the group, advised they employ a barrister. Confident that our supporters would back us, we went ahead - but now have a legal bill that we need your help with!

We’re confident that if lots of us put in a little bit, this fundraiser will once again prove to the pollies that they need to stand with our environment, our kids and their future - rather than a corrupt industrialist & yesterday’s dirty fossil fuels.

Please throw in a little bit if you can and we’ll share the story with Ms McKenzie and local federal MP Lisa Chesters who is yet to take a stand against Adani. 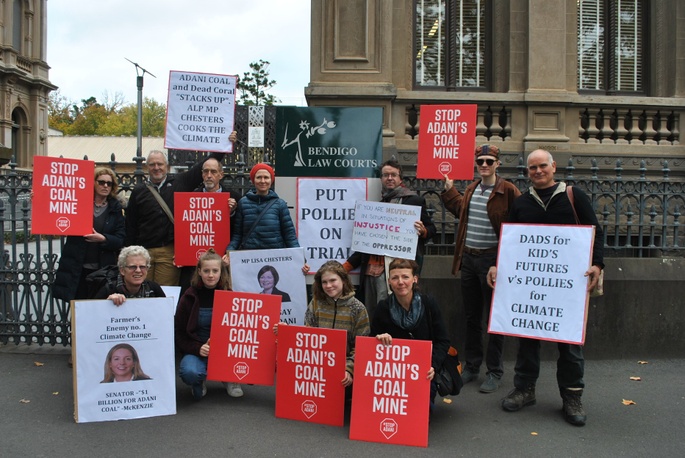 Central Victoria Climate Action is raising funds for court costs for two dads charged with trespassing in the office of Nationals Senator Bridget McKenzie to protest her support for the Adani mine.