Help The Animal Justice Party Get To 4!

The time is now to make animal justice a political issue

Well, it's official. A full election has been called for 2 July. Both Houses of Parliament will be dissolved and the entire 12 seat senate delegation will be up for grabs in Victoria. This means we have a once in a lifetime opportunity to give animals real representation in Parliament.

For too long, animal protection has been ignored by a succession of governments:

We can no longer wait for the major parties to find their moral compass and do the right thing. It's time for the Animal Justice Party - the ONLY party that doesn't need to be convinced that abusing animals is wrong - to have a direct influence in the decisions of government.

We are ready. For the animals. Their time is now.

But we can't do it alone. Your help is vital.

All three major parties have done everything in their power to ensure that minor parties are locked out of the democratic process. Not only has senate voting been reformed in their favour, they also have tens of millions of dollars at their disposal in government funding to peddle their empty promises to the electorate. What they haven't counted on is the passion and commitment of the animal-lovers of Australia.

The only thing standing between the Animal Justice Party and a senate seat is the funds to fight this election. With enough money to spread our message far and wide, we have a real chance of winning 4% of the primary vote. With that kind of power we can achieve great things. 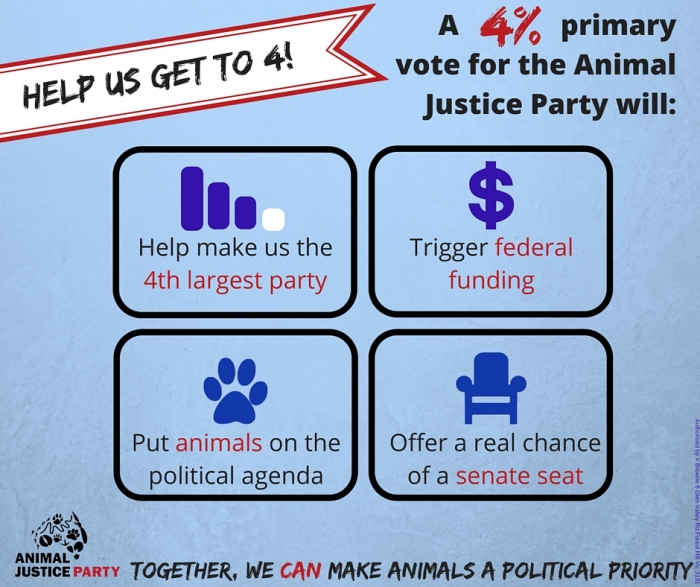 We are ready to send a message to Canberra

We have over 50 lower house candidates across Australia, ready to do the hard work necessary to hold the major parties to account. We will also be standing two senate candidates in Victoria, ACT, NSW, Queensland, SA and WA. With those kinds of numbers, it has never been easier for the people of Australia to give their vote to the animals.

We need $25,000 in Victoria to launch our campaign across TV screens and social media. The people of Australia are ready for a message of hope and compassion amongst a sea of cynical self-interest. With your help, we can spread the message that animals matter. We can turn that message into votes and change laws, so that animals are finally given the respect they deserve.

Will you help fund our campaign of kindness?

To thank you for your generous contribution, we have a range of AJP merchandise to send to you. From caps, beanies and bandanas to t-shirts, hoodies, mugs and wine, there is something for everyone and every budget. All fair trade, vegan and high quality materials. 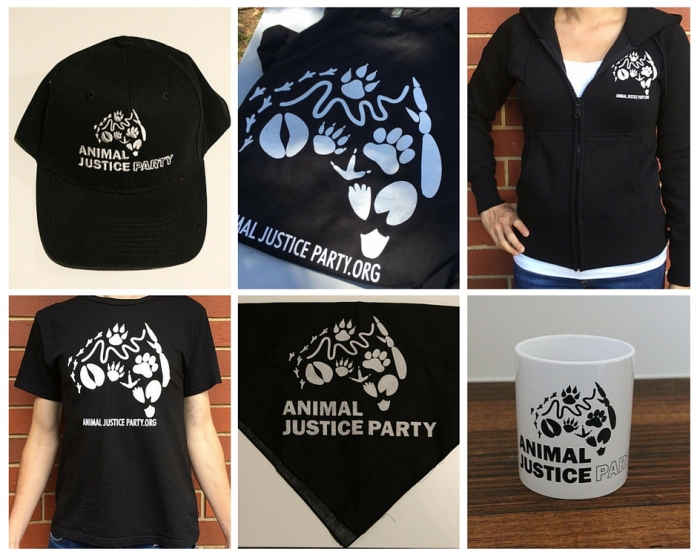 Together, we can achieve so much.

Donations by individuals to registered political parties of between $2 and $1,500 in a financial year are tax deductible.

Amounts received by the Animal Justice Party Secretariat of more than $13,000 in the 2015-16 financial year will be subject to disclosure under the provisions of the Commonwealth Electoral Act 1918. 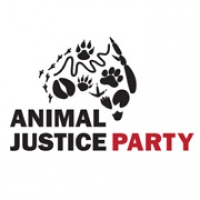 On July 2, we CAN put animals on the political agenda with 4% of the primary vote! Help us to bring kindness, equality and non-violence to the corridors of power for ALL of Australia’s inhabitants.

You will receive a book of 10 lottery tickets. Prizes galore, including 2 cars, computers and holidays. Visit peopleschoicecu.com.au/community-lottery-home/Prize-List/ for further info.

All of the items included in the Mega Bundle, PLUS a mixed case of AJP Goodwill Wine. And the gratitude of the animals of Australia.

Get in touch with Help The Animal Justice Party Get To 4!