$509.20 to disclose some truths about Adani's rail plans.

All of Australia's leading news agencies reported in early December 2016 that the Northern Australia Infrastructure Facility had given conditional approval for a 1 billion dollar loan to Adani for the North Galilee Basin Rail Project. This reportage was based on a single report by a Courier Mail journalist and have never been confirmed by any official, publicly available statements.

In March 2017 while the Queensland premier was visiting India, Adani issued a statement through the Economic Times (of India) which was completely ignored by the Australian media. That statement confirmed that Adani plan to build a standard gauge rail line called the North Galilee Basin Rail Line. The second rail line of the 2 rail lines proposed by Adani is a dual gauge line designed to connect to the existing narrow gauge Goonyella system.

3 Indigenous Land Use Agreements with Adani relating to the North Galilee Basin Rail Project were signed during 2014 with one possibly being signed during the period covered by RTI 488. Juru native title holder Carol Prior spoke with ABC NQ in October 2014 saying that many Juru people were not informed of the opportunity to object to the Juru agreement being signed off. As reported in the Townsville Bulletin in October 2016 Prior and other Juru people are still persuing transparency from the Aboriginal corporation responsible for the Juru native title claim and dealings with Adani through the Office of the Registrar of Indigenous Corporations.

Another RTI disclosure from around the same period (RTI 493) reveals very informative statements in emails from senior treasury officials that reinforce my belief that the North Galilee Basin Rail Project has always been Adani's top priority. One official responsible for infrastructure projects worth more than 50 million explained why standard gauge is necessary for Adani to achieve the economies of scale they need. This signifies to me that RTI 488 may well contain similar statements.

More context and further posts can be found at my blog: https://wesuspectsilence.wordpress.com/

There are lots of problems! Lack of interest in Carol Prior's struggle to uncover dirty dealings by Adani that if exposed could possibly stop the rail line and hence the Carmichael mine in their tracks. That the signing of the other two other Indigenous Land Use Agreements for the North Galilee Basin Rail Project went by virtually unnoticed. That we are not collectively picking apart the North Galilee Basin Rail Project in the knowledge that it is the means of export for Adani coal, and without the means of export they can never build the mine. Also, I don't have a spare $509.20. 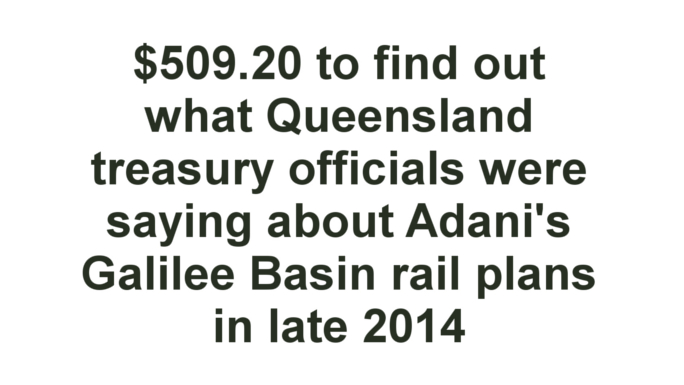 Here’s what I'm doing about it

I'm unpacking what's going on with these rail projects and exploring to see why there is so much silence around developments that I think we should be picking to pieces. I'm following my instincts and my belief in good strategy. When it comes to fossil fools the best strategy is STOP THE MEANS OF EXPORT. That means stop all the rail lines at every opportunity.

To do that we need to unpack and interrogate everything we can while being mindful that native title holders are dealing with a sick system and a need for economic certainty. We need more minds doing research and informing better strategy.

I am currently briefing a senior enviroment journalist and a native title expert who are interested in my take on the Galilee Basin developments. My briefing documents - which I share with anyone - provide detail and context around my determination to get Treasury RTI 488 disclosed.

The REWARD? I'm offering some good reading on my blog and if all goes well, elsewhere.

More on this on my blog:

The fee to disclose Queensland Treasury Right to Information request 488 relating to Adani and the North Galilee Basin Rail Project was never paid. Lets find out what the officials were saying!

Get in touch with $509.20 to disclose some truths about Adani's rail plans.