Help me support a movement I believe in

As a kid, I was always more interested in watching science fiction TV shows and reading Dungeons & Dragons adventures than in who was running for president. However, given my father's political proclivities, it's probably inevitable that I ended up finding a home in political activism. 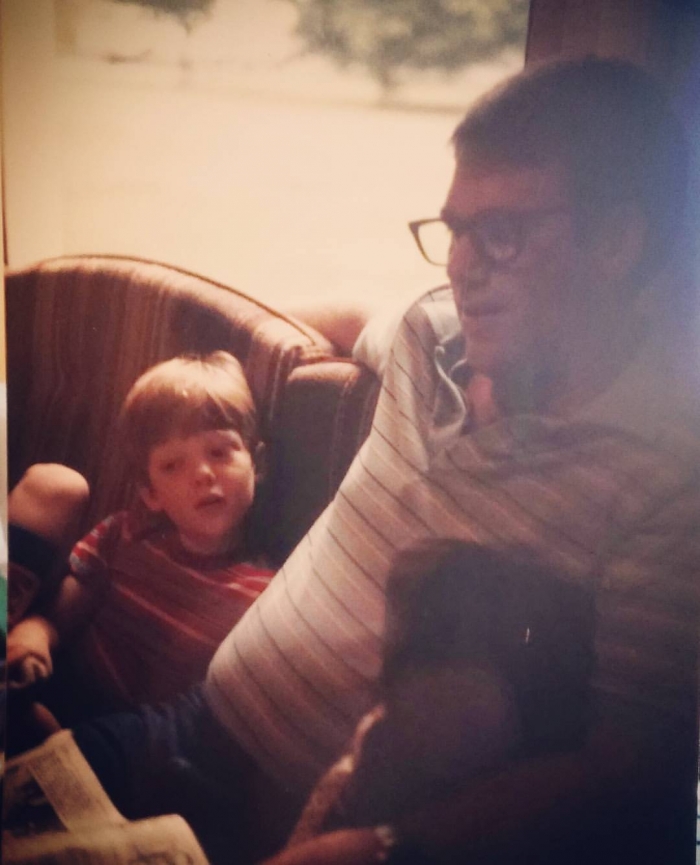 When I was a student in college, the US embarked on a preemptive invasion of Iraq. I decided then that I couldn't stand on the sidelines any longer. Developing from a inexperienced, apolitical youngster into a seasoned political activist occurred over the course of several years of trial and error. These experiences left an indelible mark on my personality and worldview, convincing me that our society needed to make a transition to an economic and political system that centered around the needs of human beings rather than the dictates of capital. 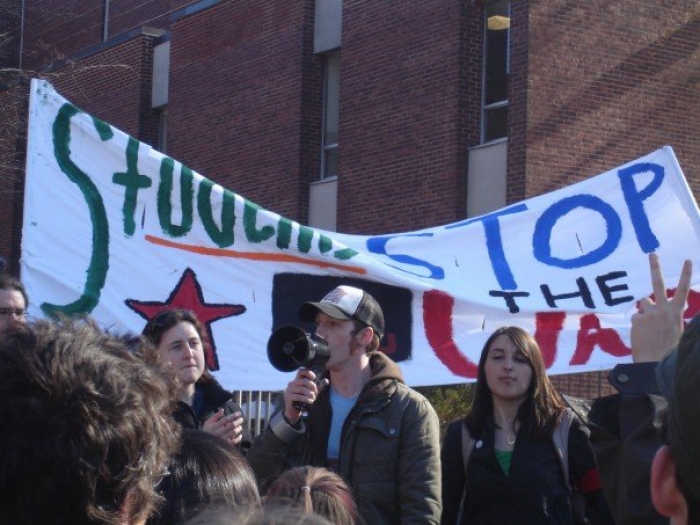 In 2011, I helped found Philly Socialists. Those of us who established the group had sought to create a political organization that made socialist values directly relevant to poor and working class people, not as an abstract creed, but through real-world action which helped raise up our most vulnerable communities. 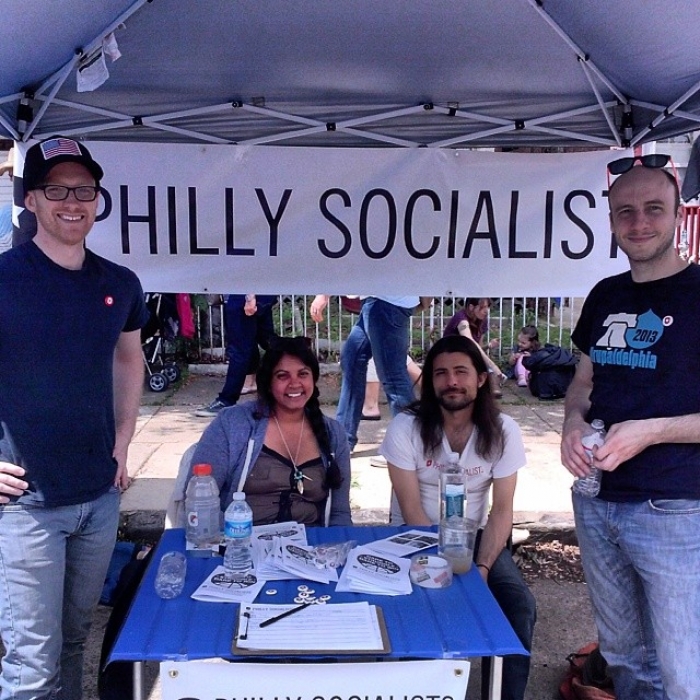 Six years later, Philly Socialists has grown in leaps and bounds, led by a cohort of talented young people. Many things have changed in my life; I'm now a father myself with a family of my own. When I think about the future of our planet, it's not just an abstract issue anymore. I look at my daughter's smiling face and I wonder what life will be like for her in a world beset by the perils of war and climate change. 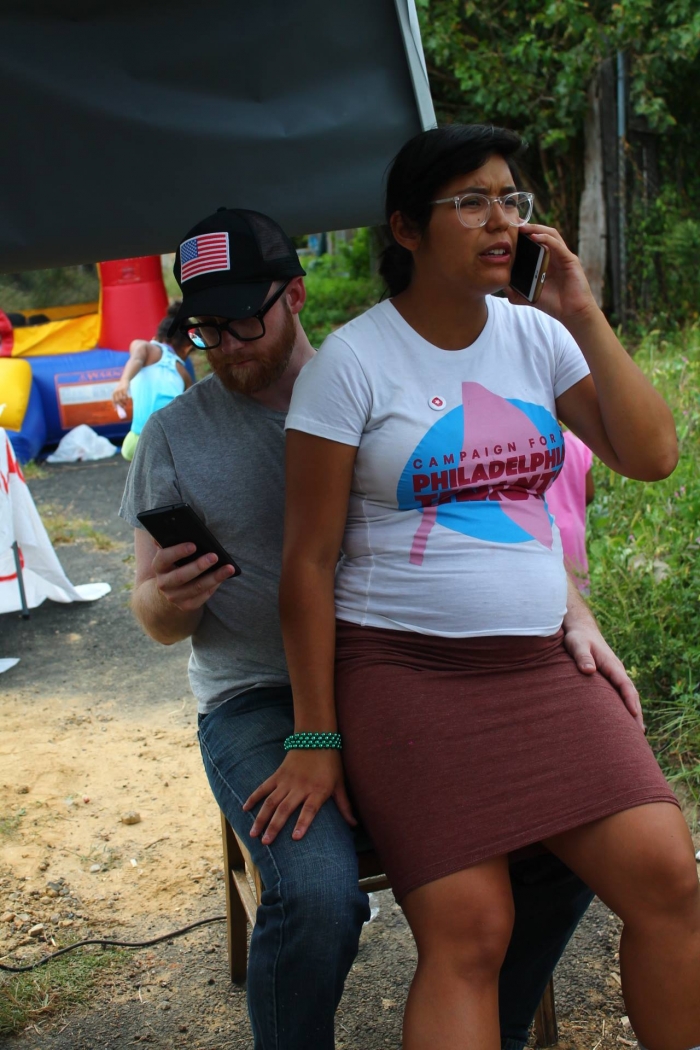 If anything, my years of grassroots community organizing have underscored the necessity of organizations such as Philly Socialists, a group which uniquely combines the embeddedness and rootedness of community organization with a larger strategic vision of a just and equitable society, as well as a roadmap to get there.

Over the years, I've regularly invited you to events (you may have even attended one or two!). You've probably followed the fortunes of our various endeavors, many of which are listed below. Through all the twists and turns, I come before you with the same conviction and earnestness that led me into political life 15 years ago. I will tell you from the bottom of my heart that I believe donating to Philly Socialists is the greatest investment you could make in our collective future.

I remain yours in the struggle, 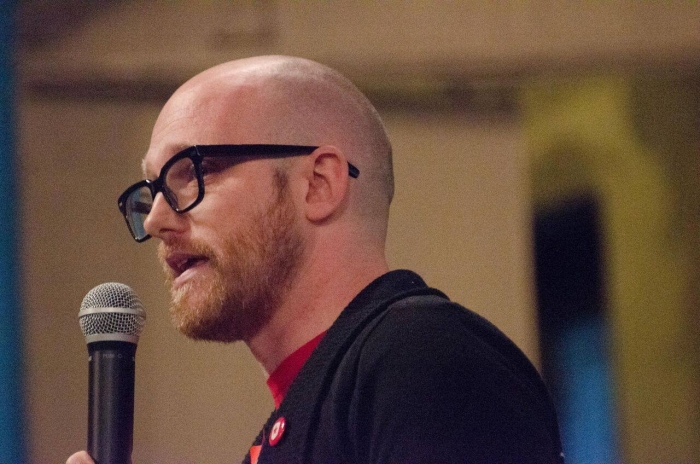 Philly Socialists was founded in 2011 by a handful of individuals who felt a pressing need to build a left alternative to fight for progressive, intersectional and working class values.

Our uniqe model focused on community organizing, fighting the power and serving the people under an explicitly socialist banner, to build a social base committed to revolutionary change.

Where renters in our city wanted to fight greedy slumlords, we helped build a citywide Tenants Union. Where immigrants were prevented from seeking out educational opportunities, we organized free English classes. Where trash-filled, vacant lots stood, we met with our neighbors and built community gardens. None of this would have been possible without the generous financial support of our sympathizers in Philadelphia and beyond.

A moment of danger, and resistance

Since the Trump administration came to power in January, we've seen an escalation in attacks on our communities. At the same time, progressive and working class Americans are mobilizing as never before. We are protesting, we are resisting, but we are also looking for a way forward, a way to build a better society than what has come before us.

We believe Philly Socialists offers that way forward, and that we have the track record to prove it!

What we've been able to accomplish with your help

Today, Philly Socialists is asking for your help once again. We have a series of ambitious initiatives, which we truly believe can help bring coherence, direction, and organization to our movement. But we need your support to make this happen.

Since our last fundraiser in April 2016, both Philly Socialists and the political dynamic of the US at large have shifted considerably. Some of our highlights from the past year: 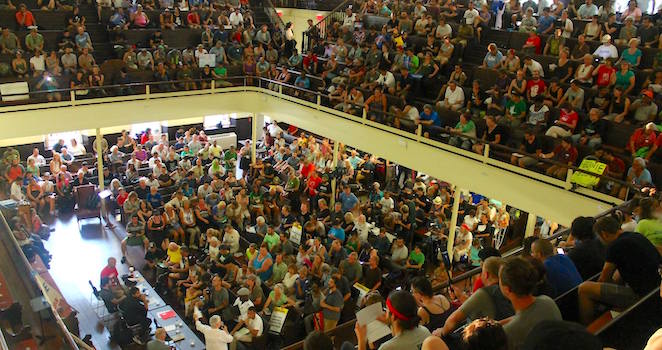 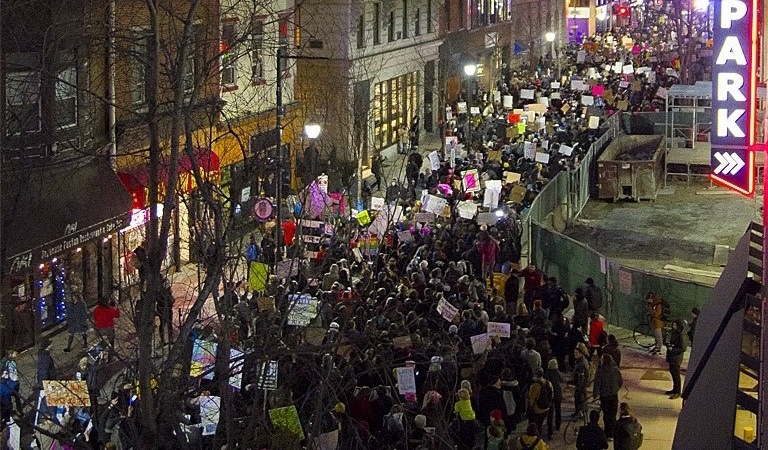 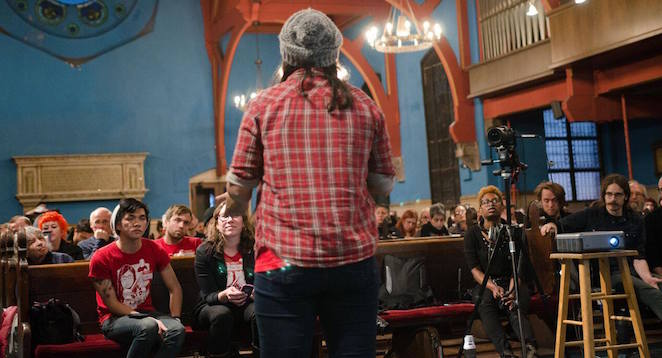 With your support, here's what we plan to do next

You can be a part of this movement

Your generosity and belief in us are much appreciated. These perks are our way of saying "thanks, really!!" 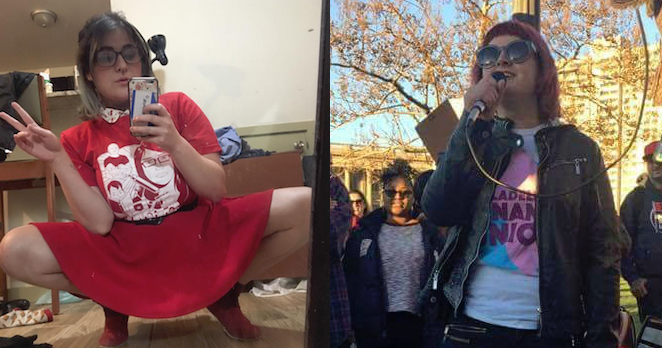 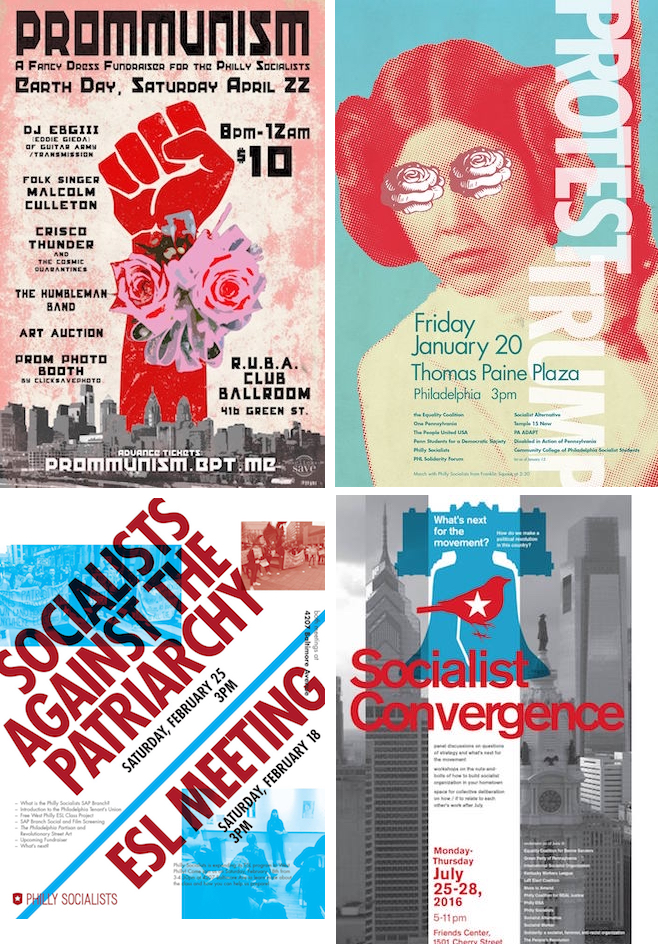 $20 gets you one of our most iconic posters, your pick! All designed by Alex Zahradnik. $75 if you want your copy framed. 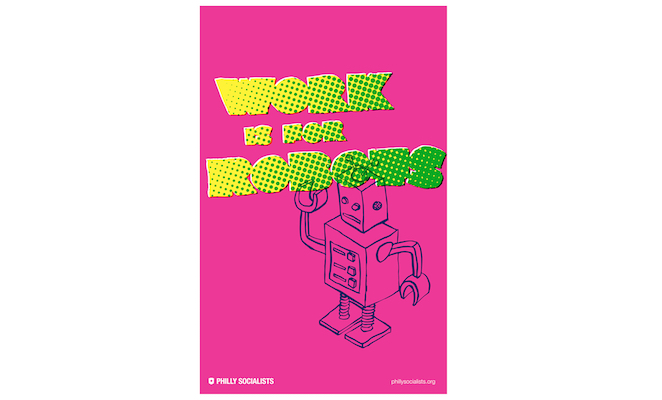 We believe that menial work is for machines. Help us inch a little closer to fully-automated luxury communism by donating $100 and claiming this hand silkscreened propaganda poster designed by Alex Zahradnik.

See more perks and photos in the righthand sidebar! 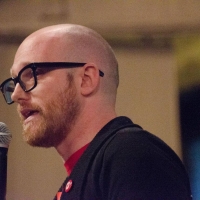 In the years since I helped found Philly Socialists, our movement has grown into a powerful political instrument. With your support, we can finally bring our model of organizing to the national stage.

$5 Our Heartfelt & Handwritten Thanks

If the Bernie campaign taught us anything, it's that every single donation counts! No matter what the size. Let us share how much we appreciate your support with a handwritten thank you note.

A custom-written poem just for you written by Peter Myers, featuring the subject matter, formal parameters, or other characteristics of your choice. Peter's poetry and criticism have appeared in Prelude, Salt Hill, apt, Broad Street Review, and other publications.

Sold out
$15 Rise Up & Seize the Means of Production Button

Inspired by the colorful utopianism of Lisa Frank, this perky dolphin delivers the mandate of socialism with a smile! This approximately 2" button was designed by a comrade in the San Francisco branch of Socialist Alternative, and is backed with a pin.

Always an avid appreciator of nature, Peirce found enjoyment of whittling sticks and branches and found enjoyment from making useful items such as spoons. They can come in varying shapes and sizes for tasting, stirring, scooping, and other general kitchen needs. They will be hand whittled from either Maple, Chestnut, Hazelnut, or Walnut that is relatively fresh off the tree and treated with vegetable oil.

Choose from Prommunism, designed by Nathan Kuruna, or Protest Trump, the Socialist Convergence, or Socialism Against the Patriarchy, designed by Alex Zahradnik. (See campaign pitch for images)

1 hour of STEM K-8 homework help, general tutoring, and/or help applying to Philly area high schools from Olivia Ngo, who is currently enrolled in the BS/PhD in Biomedical Engineering and has mentored students through AmeriCorps and other nonprofit programs for 3 years. Order multiples of this perk for a longer session!

A radical batch of 12 socialist-themed sugar cookies by Stephanie Shamp. Steph has been making her signature Morbid Cookies for family and friends for 4 years. Every Christmas her family recoils or delights in her morbid (but cute!) designs, they're scary good.

A wool cap hand- crocheted by Kimberly Haas in Socialist red with a matching Philly Socialists pin on the brim. Kimberly perfected her crocheting skills through many years of Quaker committee meetings, where consensus can be a slow painstaking (but worthwhile) process.

1 pack of 5 cards with envelopes, hand drawn by Arielle Middleman. If you're a die-hard red, consider the design Communist roses. More of a moderate? Interpret them as zinnias in pussy pink!

The iconic Philly Socialists t-shirt (available in unisex and children's sizes). Shirt is union made in USA and was designed by illustrator Anuj Shrestha.

The signature Philadelphia Tenants Union tee, available in unisex & children's sizes, these shirts are union made in USA and designed by Alexander Zahradnik.

Radical Soups are a project of Philly Socialists that provide a supportive space for comrades and friends to facilitate discussions in form of social critique against fascism, racism, capitalism and sexism on current events and hard-hitting topics. They also feature delicious vegan, gluten-free soup. Get 4 frozen pints of different soups that have been served at these events prepared by esteemed home cook Grace Diliberto. Philadelphia-area only, sorry soup is expensive to ship!

You can support socialism and individuality too! Get a custom, top notch haircut from skilled stylist Cynthia Jones, a licensed barber who has worked at Salon Noel and continues to cut hair on the side.

Spring is here and it's time to get your bike back in the streets - Andrew can get you road-ready in no time! He has been riding bikes in Philadelphia both recreationally and professionally for over 5 years and is a volunteer mechanic with one of the City's local non-profits. Only 2 tune-ups available, so donate now and claim yours before they're all spoken for! (Philadelphia only)

The Philadelphia Partisan is our full-color monthly newspaper offering an incisive blend of theory, hyper-local reporting, poetry and art. Claim this perk for a year's subscription, including the first three issues we've published, delivered directly to your door.

A poster from the Philly Socialists collection framed in a handsome black frame. Choose from Prommunism, Protest Trump, the Socialist Convergence, and Socialists Against the Patriarchy, all of which were designed by Alex Zahradnik.

5 hours of childcare provided by Muffy Torres, who has years of childcare and babysitting experience along with certifications, including First Aid and CPR. Can only be redeemed within the Philadelphia area.

This is a 4-color custom silkscreen print on quality, archival French's paper in a limited hand-numbered edition of 100. Poster is designed & printed by Philly Socialists' own Alex Zahradnik, a graphic designer and organizer with a 15-year career in combining social and environmental justice activism with design. (See main campaign pitch for photo).

A piñata made by avid crafter and activist Mara Henao, designed to decompress pent up feelings of anger and disappointment over our current political environment. The character of the piñata can also be customized.

Sold out
$150 Power of Attorney Documents & Simple Will

Be sure to leave some Green to your favorite Reds! Powers of Attorney documents allow your designated loved ones to act on your behalf in medical and financial matters if you are incapacitated. A simple Will will allow you to ensure your resources are distributed as you wish at the time of your death. This perk is great for a family with young children or for older comrades who have not gotten around to it yet. Will Emmons is a second generation elder law attorney at a small family practice, and this service is being offered at a 50% discount from his commercial rate.

A custom painted portrait of you or someone you know in a revolutionary stature by artist Ilana Dodelson. Ilana studied art at Bard College and has exhibited work in Brooklyn, Upstate New York, and Western Massachusetts.

Select
$1,000 Karaoke with the Central Committee

At our last Congress we voted to expand the size of the Central Committee. You know what that means: all the more people to party with! Join our elected leaders for a rip-roaring night on the town, drinks and your cab ride home on us. Consider yourself warned: the Chair has quite the set of pipes. 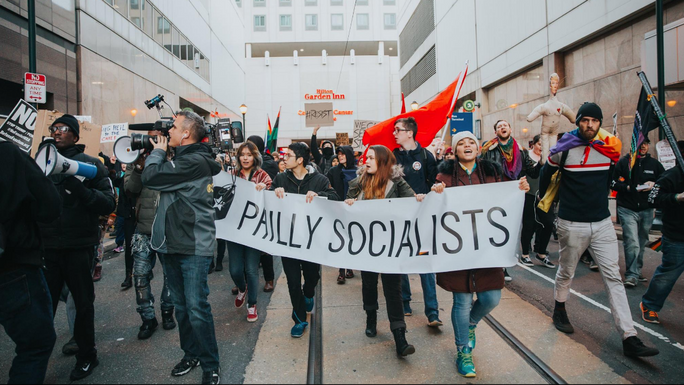 This fundraiser is part of the "" campaign.

Together with other fundraisers, they've raised $17,305 so far!